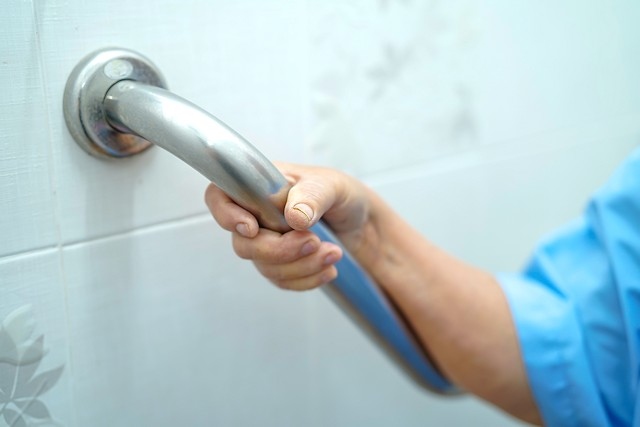 The ombudsman found that failings had caused harm, stress and anxiety to a care home resident

Care home staff failed to call for medical help after an elderly mum suffered a fall just weeks after breaking her hip.

The woman, who has since died after catching coronavirus in hospital, was only treated when her daughter found out the next day and insisted she was seen.

Rochdale Council, which arranged her care, has now been told to apologise following an investigation by the Local Government and Social Care Ombudsman.

The watchdog’s report says that ‘Mrs Y’ – who had dementia and was ‘unsteady on her feet’ – suffered her first fall at the home in January last year.

She had complained of pain from her elbow and mid-thigh, but did not feel it was bad enough to warrant a trip to hospital.

Carers helped her to stand, then sit in a wheelchair before taking her to bed. They gave her some pain relief and returned 30 minutes later to check on her.

By this time she was in pain and shouting. Staff checked her leg and found signs of it being broken – an ambulance was called and she was admitted to hospital for a broken hip.

Mrs Y was discharged from hospital in early February 2020, and her risk of a fall was raised to ‘medium’ as she was now less mobile.

In mid-February she fell again – landing on the same side as the hip she previously broke.

Staff did not see the fall happen.

But when they found her sitting on the floor, they did not call for medical advice or contact her daughter, ‘Mrs X’.

After discovering her mother had fallen again the following day, Mrs X began making arrangements to move her to another home.

In early March the home called Mrs X to say Mrs Y had again fallen – although the ombudsman reports this appears to have been a miscommunication and did not happen.

She was visited by a GP that afternoon, to discuss a cough she had and check her leg.

A few days later, she suffered a heart attack and was taken to hospital, where she contracted Covid-19 and sadly died.

The ombudsman found that the care home had assessed Mrs Y’s risk of a fall and had 'acted appropriately' once this was deemed to have increased.

But the report adds that the care provider was at fault for failing to seek medical help straight away after Mrs Y’s first fall and for the way it responded to her second fall weeks later.

Mrs X also raised concerns over her mother’s care as she had found her ‘sitting in urine and with faeces under her nails’ on several occasions.

The care provider has accepted it did not offer Mrs Y help with her nail hygiene every day but that she had also refused support and it could not force her.

It also reminded staff about the ‘importance of maintaining residents’ personal hygiene and dignity’.

Although the care home was found at fault, the council remains responsible for the services it commissions.

The ombudsman found the failings had caused harm, stress and anxiety to Mrs Y, as well as ‘distress and uncertainty’ to her daughter.

The authority was ordered to apologise to Mrs X for the uncertainty caused by the care home’s failure to respond appropriately to Mrs Y’s fall in January 2020.

It was also told to ensure the provider reminds staff to seek medical advice as soon as possible after a fall, and record when a resident refuses support with personal care, including the action taken in response.

Steve Blezard, the council’s adult care director of operations, has responded to the report.

He said: “We have accepted the findings of the Ombudsman and ensured the recommendations set out in the report were immediately put in place.

“An apology has been provided to the complainant and, through our action, we ensured the care provider updated its procedures and implemented them in full. The safety and wellbeing of our residents is always the number one priority.”