You are Here: Home » News » News Headlines » Criminals' ill-gotten gains to be re-invested into policing and community projects 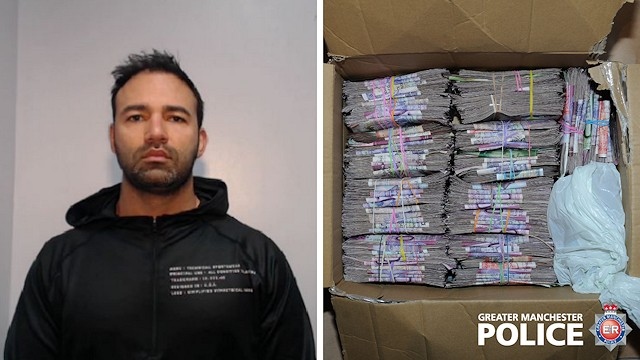 Over £1million in cash was seized from fraudster Aram Sheibani

Almost £1million seized from criminals will be re-invested into policing and community projects across Greater Manchester.

Greater Manchester Police’s Economic Crime Unit (ECU) has been granted £1.89million after successful bids at a forfeiture hearing at Tameside Magistrates’ Court last week, half of which can be re-invested into policing and community projects across the region.

The money is made up of the value of criminals' assets and money that has been stripped by law-enforcement in Greater Manchester following civil 'proceeds of crime' investigations.

All forfeited funds are sent to the Home Office and half is returned to GMP to be re-invested in a range of policing and community projects as part of the force’s wider approach at tackling serious and organised crime.

Officers from the ECU were successful at all 17 forfeiture hearing slots that took place, relating to a range of investigations including drug conspiracies and money laundering.

The hearing involved the illicit gains from high-profile cases, such as that of multi-million pound fraudster Aram Sheibani from Trafford, who was sentenced to 37 years in jail last month after being found guilty of 20 offences.

A total of £1,052,451 in cash recovered from a number of addresses linked to him was forfeited as well as jewellery, art and high value items worth over £51,000.

Also considered as part of the hearing were a number of high value cash seizures, as well as nearly half a million in bank balances being frozen by specialist officers.

Two of the cash seizures relate to the recovery of £134,255 cash following the execution of a firearms warrant by the Serious and Organised Crime Group in Cheetham Hill in March, and the recovery of £40,830 following a traffic stop by officers in the Whitefield area in the same month.

The bank balance forfeiture relates to officers from the Asset Detention and Recovery Unit identifying that £473,000 of criminal funds had been deposited in a Manchester account.

Enquiries showed the account holder did not live at the address and the account is suspected of being set up fraudulently.

Proceeds of Crime hearings take place on a weekly basis and usually involve sums of a few thousand pounds, with some resulting in figures as high as £140,000, but it is rare to be granted over £1million.

Detective Chief Inspector Joe Harrop, of GMP's Economic Crime Unit, said: "Whether it's in the form of cash, drugs, or other assets, this is money that was in the hands of serious and organised criminals who made their worth through unscrupulous and illicit means and it is a fitting conclusion that this money can now be reinvested into tackling such crime in society.

"Some of the projects that we have embarked on help us to really work with communities and target the people that need such initiatives the most, and there is no doubt that this money will help make a substantial difference to all that we serve as we continue to tackle the prevalence and causes of organised crime in Greater Manchester."