You are Here: Home » News » News Headlines » Oldham man who made and imported Class B drug Spice from Middleton shipping container is jailed 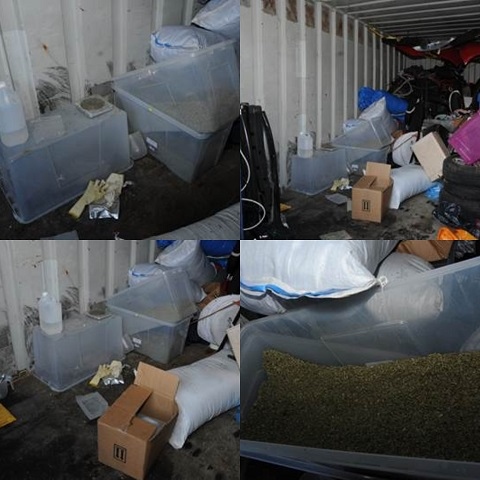 In the container, officers discovered 1.5kg of cannabinoid powder, acetone and 70kg of marshmallow leaves, as well as the equipment needed to produce Spice

An Oldham man who stashed equipment and ingredients to make over a million pounds' worth of the Class B drug Spice in a shipping container in Middleton has been jailed.

Matthew Styles, 34, of HMP Preston, but previously from Oldham, appeared at Manchester Minshull Street, Crown Court on Friday (9 July) and was jailed for 11 and a half years in prison for a catalogue of drug related offences.

Spice is a synthetic cannabinoid, originally designed to mimic the effects of the active ingredient in cannabis and has become known for leaving users with a 'zombie-like' appearance. It was legal before the law changed to categorise Spice as a Class B drug in December 2016.

In early 2017, while under surveillance, Styles was seen at a shop where he purchased marshmallow leaves which are used in the production of spice. He was also spotted under surveillance at a shipping container in Middleton, which officers searched on 8 December 2017.

In the container, officers discovered 1.5kg of cannabinoid powder, acetone and 70kg of marshmallow leaves, as well as the equipment needed to produce Spice.

Officers then searched Styles’ home and found a delivery note for a package from China, which was used to import the cannabinoid to make Spice. Styles’ numerous phones also proved his involvement in supplying Spice across Manchester and importing the materials needed to produce it.

Over the course of the investigation, it was established that Styles had purchased enough marshmallow leaf to produce 647kgs of spice which would have a street value of around over one million pounds.

He failed to attend court in 2018 and following work by detectives, it was discovered he had fled the UK using a hire vehicle to travel through the Channel tunnel into France and subsequently into Spain.

He was assisted by Keith Pritchard, 58, of Collyhurst, who hired and drove the vehicle out of the UK and arranged for the purchase of the travel tickets.

Pritchard was arrested on his return to the UK in December 2018 and Styles was later arrested in the UK on 19 August 2020. They were both charged with conspiring to pervert the course of justice and pleaded guilty in April 2021. Pritchard was jailed for 18 months for his part on Friday.

Detective Chief Inspector Patrick Goodrich of GMP’s City of Manchester Division, said: “From the sheer volume of Spice we recovered, it’s clear that Styles was a prolific supplier with no concern for the vulnerable people he was putting at risk; exploiting their weaknesses just to increase the profits of his selfish, illicit, business.

“The supply of drugs is absolutely unacceptable and I hope this sentence encourages other people who have been affected by drugs in their area, to report this to us so we can take action.

“We do and will continue to act on the information that we receive from people about the supply and manufacture of drugs. Today shows that no matter how big your production, we have the resources and processes to take you down.”