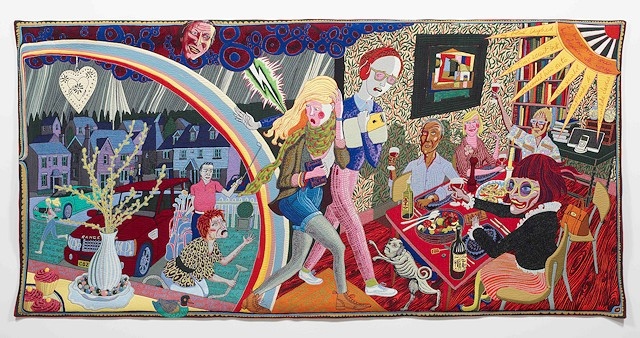 Titled The Vanity of Small Differences, the work of the Turner prize winning artist will be on display for the public from Saturday 17 July until 26 September 2021.

Perry is an English contemporary artist, writer and broadcaster and his latest exhibition is part of a UK-wide tour.

The exhibit explores Perry’s fascination with taste and class, featuring six tapestries which focus on English class through the story of the life of Tim Rakewell.

The tapestries follow Tim Rakewell’s progression through modern British society from birth to death, comprised of characters, places and objects that Perry met on his travels through Sunderland, Tunbridge Wells and the Cotswolds.

Mark Doyle, Co-Head of Culture at Touchstones, which is operated by Your Trust (formerly Link4Life), said: “We’re thrilled to be hosting Grayson Perry’s work at Touchstones and it’s fantastic to be showing his tapestries in Rochdale.

“His work is incredible and there’s a brilliant story behind the tapestries that really captures the imagination. Grayson will be hosting a special event with us in September, so it will be a wonderful opportunity for people to ask him questions and share their creativity.

“We’re also running a public programme of activities alongside this exhibition. Targeted at families over the summer months there will be lots of fun things to do.”

The Vanity of Small Differences tapestries were created alongside the Channel 4, Bafta-winning documentary series 'All in the Best Possible Taste with Grayson Perry' (2012).

The documentary followed Perry as he visited three different regions of England and explored the taste of the different social groups he encountered. This flowed into Perry’s work and influenced the creation of the six tapestries included in the exhibit

The 61-year-old is widely known for his ceramic vases, tapestries, as well as his observations on the contemporary art scene; which have helped him make a statement in the world of art.

Grayson Perry said: “The tapestries tell the story of class mobility, for I think nothing has as strong an influence on our aesthetic taste as the social class in which we grow up.

“I am interested in the politics of consumerism and the story of popular design but, for this project, I focus on the emotional investment we make in the things we choose to live with, wear, eat, read or drive.

“Class and taste run deep in our character – we care. This emotional charge is what draws me to a subject.”

The Vanity of Small Differences is jointly owned by the Arts Council Collection, Southbank Centre, London and the British Council Collection. Gift of the artist and Victoria Miro Gallery, with the support of Channel 4 Television, the Art Fund and Sfumato Foundation with additional support from Alix Partners.

The UK tour of the tapestries is supported by the Art Fund and the Sfumato Foundation.

Entrance to the exhibition is free.

Touchstones Rochdale is open Wednesday – Saturday, 10am – 5pm and Sunday 10am – 4pm.