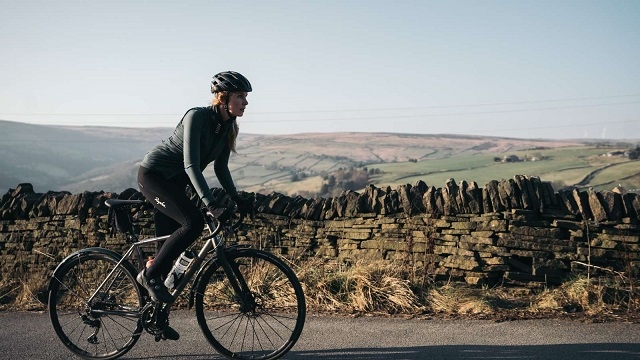 Cycling influencer and YouTube vlogger Katie Butler, 35, from Middleton, has been named alongside two other Greater Manchester women in the cycling charity’s list recognising significant achievements in promoting women’s cycling.

The women have all been recognised in celebration of the amazing work they have done to inspire other women to cycle, as part of Cycling UK’s Women’s Festival of Cycling which runs between 17 July and 1 August.

As well as celebrity names, the list also includes less well-known names of women who have been working tirelessly at grassroots level during particularly difficult times to encourage and support more women to ride: people like Katie.

Katie started cycling whilst travelling abroad. At around 100kg and struggling with fitness Katie documented her relatable cycling journey via YouTube, including the ups and downs, with the hope of showing it’s possible for anyone to start cycling and improve their fitness. She now regularly tackles mountain endurance rides and organises women's Zwift rides.

She said: "Cycling was something I took up while I was travelling abroad. I bought my first road bike in Australia and it was the best decision I’ve ever made. At the time I was around 100kg and not the fittest of my life, despite running a fair bit. But from then on I used to bike to explore, and took it across South East Asia and then on the plane back to the UK. I started to commute to work, go on club rides and as my fitness grew, my weight dropped.

"From the start I documented my journey on my YouTube channel and it has shown how I have become the fittest I’ve ever been - and dropped around 35kg in the process. I don’t ever say this to brag, but to show that it’s possible for anyone to start cycling and improve their fitness. I was always the one at the back of club rides and the last up the climb, but now I love endurance rides in the mountains / hills or anything with an incline.

"I’m also so fortunate that cycling and creating videos around my adventures is how I now make a living. I’m incredibly lucky and always so grateful for that day I got on my first road bike."

To launch its annual Women’s Festival of Cycling, Cycling UK has also released figures showing that more women have taken up cycling during the coronavirus pandemic. A survey found that 31% of women surveyed switched from a car to a cycle for everyday journeys, and those who cycled regularly reported improvements to their wellbeing.

Although the number of women cycling increased during lockdown, men are still cycling nearly twice as much as women.

Cycling UK is encouraging women to stick to the pedals and continue to replace their car journeys with cycling, and is highlighting women who are inspiring, teaching and encouraging others to do so.

Sarah Mitchell, Cycling UK chief executive, said: “Congratulations to Maxine, Lucia, Nadia and Katie for making it into our 100 Women in Cycling in 2021. It’s an incredible achievement and testimony to the tireless work they’ve done to raise the profile of women’s cycling.

“Every woman on our list is a powerful ambassador for women’s cycling, and many have done outstanding work supporting women to cycle during lockdown. But sadly, women remain underrepresented when it comes to everyday cycling.

“During this year’s festival we’re asking every woman who already cycles to find just one more woman they can help and inspire to get on their bike.”

The Women’s Festival of Cycling features a range of virtual events, local group rides and a social media challenge asking women to share pictures of their ‘bicycle face’.