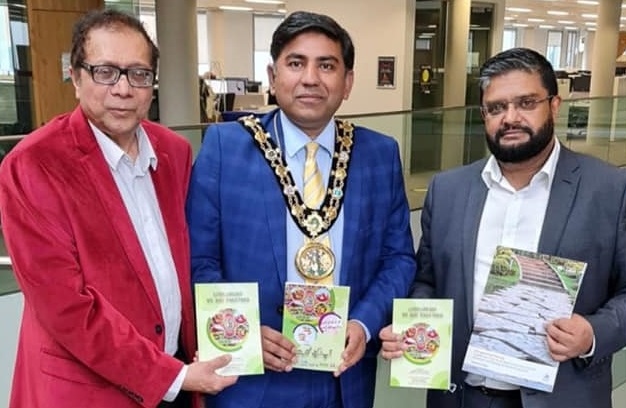 Both penned by Shahid Mohammed, the first is an academic book, 'A Fragmented Pathway, Experiences of the South Asian Community and the Dementia Care Pathway’, supported by Salford University.

The second, facilitated by Dr Abdul Shakoor, is a bilingual collection of dementia family carers’ reflections, experiences and poetry during the Covid-19 pandemic and lockdowns, entitled, ‘We Are Together’.

There is no word for dementia in most non-English languages; as a result, dementia is often seen as related to old-age or mental ill-health. It can also be perceived to be possession by spirits or an effect on people due to ‘black magic’ in some faiths and cultures, whereas in reality it is a physical change in the brain.

Dementia is the name for a group of symptoms that commonly include problems with memory, thinking, problem solving, language and perception. In a person with dementia, these symptoms are bad enough to affect daily life.

The symptoms of dementia are caused by different diseases that affect the brain, including Alzheimer’s disease.

The focus of Shahid's academic study ‘A Fragmented Pathway…’ seeks to address and highlight each of the barriers through the dementia care pathway and offer systematic and practical solutions to health and social care services, dementia care professionals and commissioners.

During the launch, Shahid also provided a briefing to several elected members of Rochdale Council, including Councillor Mohammed Zaman; Cabinet Member for Health & Social Care, Councillor Iftikhar Ahmed; Councillor Shakil Ahmed; Deputy Leader, Councillor Daalat Ali; Councillor Peter Rush; members of Asian TV Channels; and the chairman of the Pakistani and Kashmiri Community Association, Hafiz Mudassir Yasin on what dementia is, how it's perceived in BAME communities, and the issues that affect south Asian family carers and their loved ones living with dementia.

Councillors, and those who attended the launch, congratulated Shahid on his books, thanked him for his presentation and appreciated his in-depth knowledge of the subject and for his many years of commitment and dedication to dementia awareness.

Councillor Iftikhar Ahmed talked about the Willows Dementia Hub in Rochdale and the Oasis Unit at Rochdale Infirmary. Similarly, Councillor Daalat Ali gave an extremely informative insight into the health inequalities and spoke about how this can be addressed with Public Health.

Mayor Aasim Rashid and elected members pledged their support and agreed to hold further conversations to ensure health and social services meet the needs of Rochdale’s diverse communities, from raising awareness, appropriate pre- and post-diagnosis support, through to end of life care.

Shahid's campaign is to raise awareness of dementia and empower BAME dementia carers and those living with dementia so that they have an “equal and equitable” voice and to ensure dementia services are inclusive and reflect diverse communities and their needs.

“Often service providers can mean well in saying their services are accessible, but BAME communities across the UK, struggle to access services if they or their needs are not understood.”

He also wants the government and local services to invest now in BAME health care needs, as it will not only be a saving in the future but will meet the current and projected needs.

Dementia amongst BAME communities is expected to rise seven to eight-fold in the next three decades, according to the All-Party Parliamentary Group on Dementia.

The report also highlights that BAME people living with dementia often present late for help and support, or not at all.

If you are a current or former family carer of someone living with dementia from a south Asian or BAME background and would like to support Shahid's campaign, wish to obtain a digital copy of his paper or request a hard copy of his book, please email shahidbmehaw@hotmail.com.