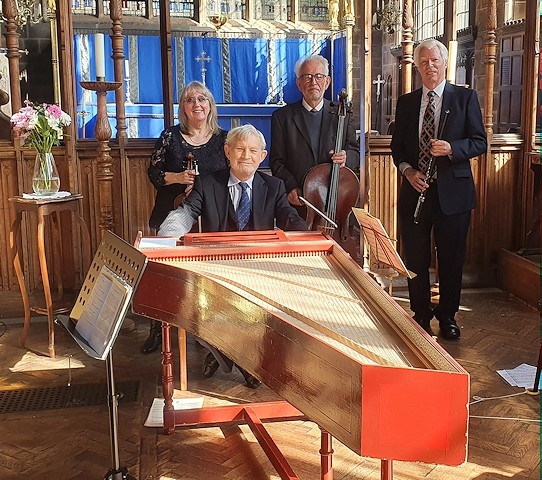 The Telemann Baroque Ensemble performed at St Mary in the Baum on Wednesday 29 September 2021.

The Telemann Baroque Ensemble has a varied line-up of talented players; it is usually underpinned by harpsichord and cello, the staple backing in Baroque ensemble playing, called basso continuo.

For cellist Roger Bisby, music has always been a great source of enjoyment since learning to play from his grandfather, a theatre musician. Interestingly, Roger read Chemistry at university and is now a Professor Emeritus of the University of Salford. Nonetheless, he has played in several orchestras, nowadays mainly with the Wilmslow Symphony orchestra and today’s ensemble.

Director and harpsichordist Peter Collier is a graduate of the Guildhall School of Music and London University and has run the Baroque Week Summer School for over 43 years for which he has built up a library of several thousand music scores. Their joint expertise provided a vibrant and solid foundation for the delightful flute and violin soloists.

Alastair Roberts started to play the flute at the age of 12. A Junior Exhibitioner at the RMCM, he continued studies for 4 years when it became the RNCM. Alongside a successful teaching career, he has played regularly with the Cheshire Sinfonia, Wilmslow Symphony Orchestra, and the Kell Wind Trio as well as making appearances as a soloist. His tone in flute sonatas by Handel and Telemann was wonderfully controlled and prudently florid.

Elaine Turnock began playing the violin aged 8. In 1969 she was one of the first girls to be awarded a place at Chetham’s School of Music when it became coeducational. In 1976 she was awarded a place at the Royal Academy of Music. Elaine has played with various orchestras in the North West, leading the Sale Chamber Orchestra and for 30 years The Carlton Ensemble and the Serenade Quartet. Her excellent playing was alternately vigorous and plaintive in violin sonatas by Telemann and Hertelli.

The whole troupe combined in a Trio sonata by Quantz to round off a wonderful hour of music in the splendid acoustic of the Grade 1 listed St Mary in the Baum church.

Rochdale’s weekly midday music – the Toad Lane Concerts happen every Wednesday at 12.30pm at St Mary in the Baum, Toad Lane, Rochdale, OL16 1AP. Entrance fee is £6. No refreshments available at the moment, but the venue is Covid-19 secure. Contact 01706 648872 for further information.