You are Here: Home » News » News Headlines » Derelict pub once branded ‘the worst eyesore in Rochdale’ could be transformed into new apartments 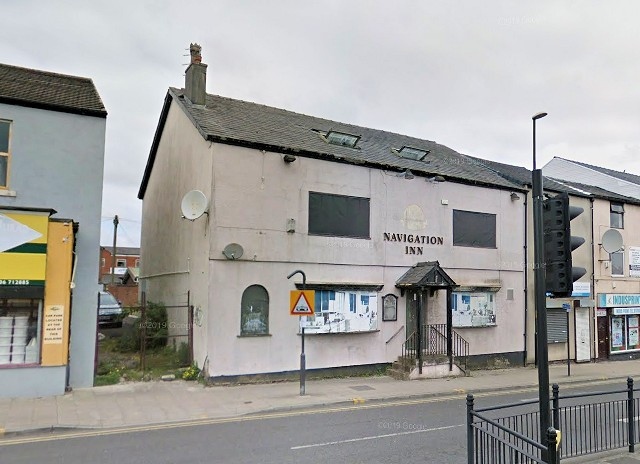 The old Navigation Inn on Drake Street has been vacant for more than a decade and was once branded ‘the worst eyesore in Rochdale’.

Back in March, its dilapidated condition was causing so much concern that the council set the ball rolling to compulsorily purchase the building using a special legal order (CPO).

Council officers felt the pub was ‘undermining’ the reputation of the town, particularly given its position at a ‘key gateway’ close to rail and Metrolink connections.

But now plans to convert the once-popular boozer into an office and new flats have been lodged with the council.

The plans include an extension to the back of the old pub, dormers, with roof lights and four parking spaces in the yard area to the rear.

A document submitted with the application claims the scheme would be a ‘vast improvement’ to the two-storey building and ‘enhance the area considerably’.

And it argues the site is an appropriate location for ‘high quality’ housing, ‘offering the prospect of increased diversity, security and a general revitalisation, especially at nights and weekends’.

“The town centre has the potential to provide unique housing opportunities which cannot easily be found elsewhere in the town, or indeed in the surrounding region,” the document adds.

“Such opportunities are likely to be particularly suitable for the young, single and students. All represent groups whose housing needs are projected to expand considerably.”

It continues: “The conversion of the building would help in providing much needed accommodation close to the town centre as well as commercial uses in this central location.”

The planning statement says the applicant wishes to avoid any that ‘further deterioration’ of the inn and ‘seeks to ensure a sustainable future for the building that is conducive with its conservation’.

Drake Street is within a conservation zone and was once the town’s main shopping centre. Although parts are now badly run down, there are still many buildings of importance to Rochdale’s history and identity.

Grade II listed buildings near to the Navigation Inn include 132 Drake Street and the Congregational Church on Moore Street.

A heritage assessment also found that the application would not harm the character or appearance of the street scene or conservation area.

In summary, it adds: “Overall, it is considered the proposed development would put an existing empty property back into a suitable and viable use and the external alterations and extension would complement the original building.”

Rochdale council will decide whether to grant planning permission for the scheme.