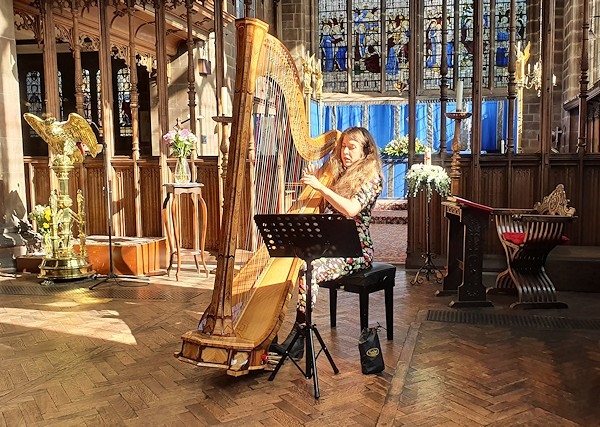 Midday tranquillity was provided by Alice Roberts and her harp on Wednesday 6 October 2021.

People search hard for this level of serenity. The midday sun through the huge windows of St Mary in the Baum created a superb setting to simultaneously raise and calm the spirit.

Eclectic harpist Alice Roberts studied on the prestigious Manchester ‘Joint Course’. In 2018 she graduated with a first from Manchester University and was awarded the Procter-Gregg prize in both 2016 and 2018 for the highest mark in performance. In 2020, she became the first ever harpist to win the RNCM Gold Medal, the highest prize offered for performance.

Alice is passionate about exploring alternative styles on the harp, and in 2018 travelled to Switzerland to study under acclaimed jazz harpist Park Stickney. Since then, she has collaborated with many musicians. In 2021, she joined the band of jazz trumpeter Matthew Halsall with whom she performs regularly across the UK and internationally. She is a founding member of Manchester-based harp duo Rascality which explores unusual repertoire for two harps, including jazz, Latin, and contemporary styles, often through her own arrangements and compositions.

Clair De Lune by Claude Debussy set the tone of the whole recital, peaceful, calm and still. The mood sailed on with SWAN LK 243 by Catriona McKay, and Windows by Dulzura, a piece constructed during lockdown with Spanish musicians on the internet.

The classic harp solo Interlude from ‘A Ceremony of Carols’ by Benjamin Britten led to Two Crooked Dances from ‘Cold Pieces’ by Erik Satie, a traditional tune Isle of Aigas arranged by Rachel Hair and Harp Sonata movement 3 by the twentieth century composer Paul Hindemith.

The heartrending aria Dido’s Lament by Henry Purcell sounded as poignant as in the opera in Alice’s arrangement. Appropriately, it is contemporary with a phrase that could describe this concert: ‘Musick has Charms to sooth a savage Breast’ (Congreve, 1697).

John Cage’s minimalistic meanderings contrasted with a jazzy, up-tempo number, Take A Break by Monika Stadler before coming to a peaceful close with the haunting Seal Lullaby by Eric Whitacre, again arranged by Alice.

There cannot have been anyone in the audience whose stress levels had not diminished by the end of this exercise in serenity, or whose savage breast was not soothed.

Rochdale’s weekly midday music – the Toad Lane Concerts happen every Wednesday at 12.30pm at St Mary in the Baum, Toad Lane, Rochdale, OL16 1DZ. Entrance fee is £6. No refreshments available at the moment, but the venue is Covid-19 secure. Contact 01706 648872 for further information.