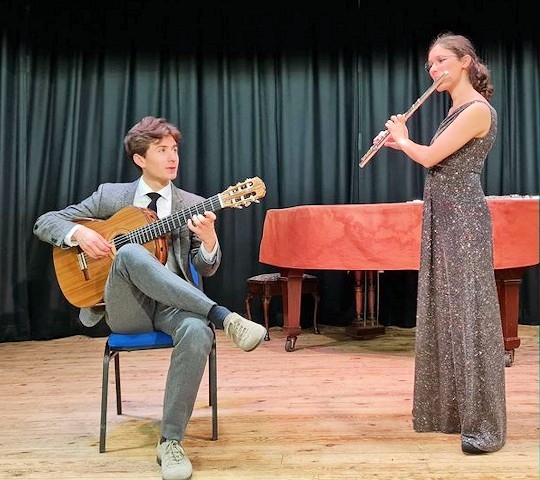 A capacity audience in Touchstones on Saturday 9 October gave overwhelming reassurance to the Rochdale Music Society trustees that their resumption of concerts following the lifting of Covid-19 restrictions had been eagerly looked forward to by subscribers and public alike. It is good to note that the range of musical styles and performances offered year by year by the society since its inception in 1980 is still appreciated.

This first concert of the 2021 - 2022 concert series was held in the Rochdale town centre venue since the Heywood Civic Centre is not yet available to the society (concerts in 2022 are scheduled for Heywood). It featured flautist Meera Maharaj and guitarist James Girling as The Meraki Duo. ’Meraki’ comes from the Japanese and means ‘from the heart and depth of the soul’.

Although the Touchstones acoustic was not ideal, it served sufficiently well for the duo to provide an evening of delightfully varied music in a well planned programme, which everyone present thoroughly enjoyed. Applause was universally enthusiastic at the end of each item, the first of which was the Sonatina for Violin and Piano Op. 100 by Dvorak. arranged for flute and guitar by the Andrews Massey Duo. Not the ‘New World’ symphony, but written in the USA around the same time, this is a work exhibiting the same conflicting emotions of feeling exiled yet at home that makes it so attractive. The flute may not have the same warmth of tone of the violin, but it can be equally forceful when required, and render soaring melodies with passion and depth of feeling, as in this performance.

Similarly, the guitar may be thought of as not being able to match the tone and power of the modern concert piano, but with the technical prowess of a performer like James Girling it can provide a no less complete and convincing accompaniment. 'Arrangements’ do not always work, but this one did splendidly.

Meera Maharaj then played two complementary dance pieces for solo flute, a Bach Allemande and a Gavotte by William Alwyn, both finely refined performances. James Girling followed on with two Bagatelles for solo guitar by William Walton, which beautifully demonstrated the wide range of melodic and harmonic resources available to an accomplished exponent of the acoustic guitar such as he.

The first half of the concert ended with the duo giving a polished account of an arrangement of the wistful song, Beau Soir, by Debussy.

In the second half, the audience was transported to South America for revelatory performances of some colourful and adventurous twentieth and twenty-first century music from that continent, beginning with three of the Tangos from the History of the Tango by Argentinian guitarist and composer, Astor Piazzolla, whose 100th birthday anniversary year this is. Flute and guitar danced together with just the right amounts of tender and passionate romance that this music shows developing over a period of some hundred or so years.

The last three works in the concert featured music by contemporary Brazilian composers, which no doubt opened the ears and minds of those in the audience who, like myself, are not familiar with all the technical explorations and accomplishments of classical guitarists in recent years. Rafael Marino Arcaro is a young composer whose 4 movement Suite for Flute and Guitar, written for the Meraki Duo in 2020, and called A Norte, Rio Preto - ‘North of Rio Preto’ - makes enormous demands on both instrumentalists. It is a musical embodiment of the nature of the Brazilian rain forest and its indigenous people, savagely tender and wildly beautiful, calling for extreme treatment of the instruments involved. Would you believe the extraordinary sounds a flute or guitar can produce, and in such quick succession? No wonder this performance was greeted with gasps of astonishment and rapturous approval.

The planned concert ended with a let-your-hair-down account of the Quarteto Novo’s Misturada. Then, as an even more cathartic encore the duo returned to play music from the film music score of Black Orpheus.

The Rochdale Music Society’s next concert will be held in St. Chad’s Parish Church, Sparrow Hill, Rochdale on Saturday 27 November when the Georgian pianistic genius Luka Okros returns to Rochdale by audience demand. His concert will include Nocturnes and Ballades by Chopin in what promises to be a programme to remember. Full details on the website www.rochdalemusicsociety.org or see Rochdale Online Events section.