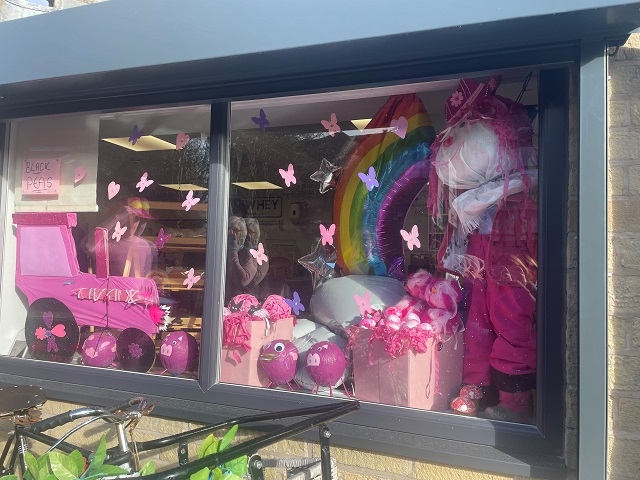 Newhey Butchers has been named the winner of the first ever Milnrow ‘Pink’ Hey event in aid of Cancer Research UK.

Milnrow ‘Pink’ Hey is an extension of the Little ‘Pink’ Borough campaign, which runs each year throughout October to raise money for Cancer Research UK.

The windows were judged on Friday 22 October by ward councillors Andy Kelly, Irene Davidson and Dave Bamford with the Shaw Road butchers winning the first accolade for its farm-themed display.

The collaboration came about as Tracey thought it would be a good idea to turn the villages pink and wanted to fundraise in her late mother Bridie Jacobs’ memory who sadly died of cancer earlier this year.

Organiser Suzanne Gumbley said: “Thank you to everyone who took part. If you didn’t win, don’t worry, as there is always next year! The overall reason for the campaign is to raise awareness and raise money, which we have most definitely done.

“Thank you to Andy Kelly, Irene Davidson and Dave Bamford; they had a very difficult decision to make.

“Another big thank you to all the schools/nursing/childminders that are involved and Rochdale trophy centre for the trophy.

“We are looking forward to next year and are hoping for bigger and better.”