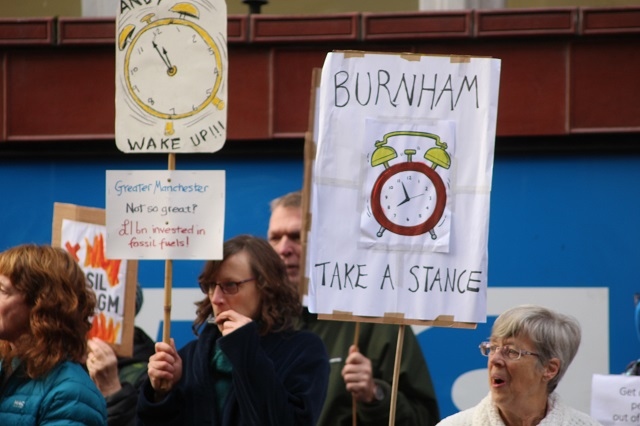 Photo: Manchester Friends of the Earth

Protesters outside the GMCA office

The GM Pension Fund is the largest local government pension fund in the UK and invests more than £1bn in oil and gas stocks each year, a strategy which has proven controversial amongst environmental campaigners.

However, the fund says it is also the largest investor in renewable energy and energy efficiency with £500m tied up in the industry, including large stakes in biomass.

The GM Combined Authority wants the region to be one of the greenest places in Europe, but the GMPF, which is run by Tameside Council, continues to invest in companies which are driving climate change through their use of fossil fuels.

Both the Governor of the Bank of England and the Pensions Minister have warned of the danger of continuing to invest in fossil fuels as Britain moves towards renewable energy – and a growing number of local authority pension funds have begun to sell their investments in fossil fuels, including South Yorkshire, Lambeth and Haringey.

The 50 campaigners, young and old, shouted, “wake up Burnham” and “no more climate deaths” as they protested on 3 November, the same day that global leaders at the COP26 climate change panel discussed finance.

Maggie Walker, one of the protesters wearing her dressing gown and slippers, said: “Investing our pensions in fossil fuel companies is financially risky as well as morally wrong.”

Joan Bennett, clad in her blue dressing gown, said: “As a GMPF pensioner, I’m really sad to see Andy Burnham hiding behind the excuse that he has ‘no jurisdiction over the pension fund’. Maybe not, but he has a massive amount of influence and should be working with the Greater Manchester councils to bring an end to the fund’s shameful investments.”

Maggie explained: “We want Andy Burnham to work to ensure that our pension fund is run in line with GM’s ambition to be a green city.

“The GM pension fund should develop a clear plan to get rid of their climate damaging fossil fuel investments soon. 2050 is far too late for this basic step in addressing the climate emergency.”

Maggie continued: “Burnham should call on GMPF to follow his lead and not sleep-walk into supporting climate breakdown.

“I’m so shocked that our GM fund has been named the dirtiest fund nationally. I’d expect them to join 150 pension funds including New York, NEST and the Dutch Government Pension Fund and commit to divest now.

“Even more horrifying, they have actually recently increased fossil fuel investments including in coal-mining companies.”

Responding to the protest, Councillor Brenda Warrington, chair of the pension fund, said: “We believe that pension assets can be invested to create a sustainable, better future without compromising on returns. As members of the Glasgow Financial Alliance for Net Zero (GFANZ), which is a global coalition of leading financial institutions established by Mark Carney, in his capacity as UN special envoy for climate and finance in the UN’s Race to Zero, we are committed to accelerating and mainstreaming the decarbonisation of the world economy and reaching net-zero emissions by 2050.

“We are actively setting a 2030 target in line with the best practice guidance on portfolio alignment metrics, which was issued just over two weeks.

“We were two years in advance of the government’s commitment in leading this agenda as recognised by the House of Commons Environmental Audit Committee describing us as having the highest levels of engagement of all UK pension funds to manage the risks that climate change poses to UK pension investments and I am sure we shall continue to lead the agenda.

“We are one of the best performing funds in the UK measured independently over the last 30 years and our performance has resulted in £3.7 billion less money that taxpayers have had to find to pay pensions. At £28.6 billion we are the largest pension fund in the local government pension scheme, tenth largest fund in UK and 150th in the world so it’s scandalous to suggest pensions are at risk and we are not taking into account climate risks.

“Guy Opperman, the Pensions Minister said in the Financial Times (04/03/2021) that merely selling your stocks that make you look bad from a fossil fuel standpoint is a ‘reverse greenwashing’ because it doesn’t actually fix the problem.

“He went further to say he doesn’t want funds to divest but to invest in our energy companies. That is what we are doing – we are the biggest direct local government pension investor in renewable energy and energy efficiency, with almost a billion pounds invested in a number of areas including biomass assets and being one of the largest stakeholders in windmill energy in the UK.

“We have also implemented a transition of £2.5 billion of the fund assets to a low carbon approach, which is undoubtedly the biggest divestment, but more importantly actual action rather than words or promises taken by any local authority in the UK.

“The fund will not immediately divest and pass the buck to someone else or worse let those who don’t care run the companies. We are committed to using our voice as responsible activist investors to align companies’ business models with the Paris Agreement. We want an orderly and just transition that is fair for communities, taxpayers and workers

“Looking at oil and gas companies we believe they are critical to [the] world as it is now and the new future. They are some of the best placed companies to support new energy sources to meet society’s needs. By not investing we give away the influence that we can have with these companies to investors who may care less than we do. This is not an outcome we want for the future for you, the fund or the generations to come.”

“The fund is operating within a clear ethical framework and seeking to change the behaviours of those companies we invest in to become carbon neutral while ensuring we protect the pensions of our members and reduce cost to taxpayers.” 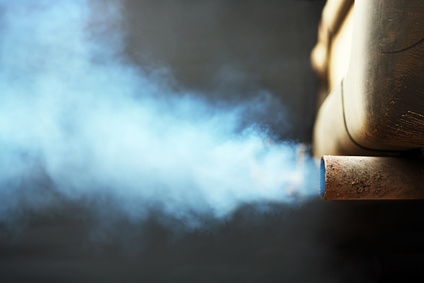 The Greater Manchester Pension Fund has also been approved as a signatory to the Financial Reporting Council’s UK Stewardship Code 2020, under their first assessment process where applicants are required to undergo a rigorous review process, which includes providing evidence of their stewardship activities and showing how they are integrating environmental, social and governance (ESG) factors into investment decisions.

The result of the new toughened code is that 64 previous signatories including several major big name asset managers were removed from the list. Only two thirds of applicants made the list, with Greater Manchester Pension Fund one of only 23 asset owners which successfully became signatories to the code.

Ms Warrington continued: “The true facts, when measured internationally and independently, is that the pension fund is 20% less carbon intensive than the average pension fund so we are moving in the right direction to become carbon neutral. We are open and transparent and publish all our actions and our data, here.

“We have recently updated our Responsible investment Policy to now explicitly mention human rights, public health, deforestation and water stewardship in addition to taking further action on climate change. We are proactively introducing industry-leading environmental standards for our energy investments.

“Under the scheme, which is based on the Task Force on Climate-related Financial Disclosures (TCFD), the fund will assess fossil fuel companies on governance, strategy, risk management and other targets. The initiative is part of the fund's drive to achieve net-zero across its portfolio by 2050 and achieve interim targets to get us there.”

Ms Warrington went on to say that Richard Curtis, co-founder of Make My Money Matter, had said that the Greater Manchester Pension Fund is one of “a small number of funds categorised as having made robust commitments in the Paris-aligned investor initiative.”

She added: “The fund co-signed the 2021 Global Investor Statement to Governments on the Climate Crisis coordinated by the Institutional Investors Group on Climate Change, which asks governments to raise their climate ambition and implement robust policies by COP26 in November.

“We must all use our voice to press government for action on this. The fund will not shirk from its leadership role and disinvest allowing others who do not care about the environment to own those shares instead and fail future generations to come,” Ms Warrington concluded.