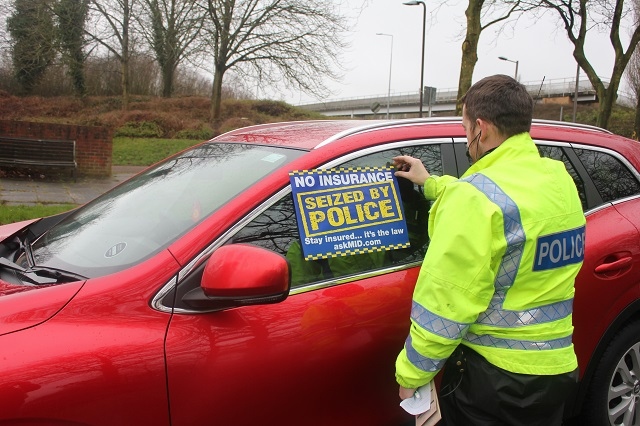 Driving without insurance can result in a £300 fixed penalty notice, six licence points and the driver’s vehicle can be seized and crushed

A national effort to reduce uninsured driving levels and protect road users is being carried out this week (15-21 November) by all 45 of the UK’s police forces.

Uninsured driving is a problem that exists across all corners of the UK, with the worst-affected areas found in Birmingham, Bradford, Manchester and Greater London.

Using government figures on the average value of prevention, MIB estimates that collisions caused by uninsured and hit-and-run drivers could cost the economy nearly £2 billion a year in emergency services, medical care, loss of productivity and property damage.

During the week of action, police officers will access MIB’s Motor Insurance Database (MID) – a central record of live UK motor insurance policies – to see if motorists’ licence plates show their vehicle as insured. If the validity of insurance is disputed by the driver, MIB will liaise in real-time with the insurer in question to confirm if the vehicle has valid insurance.

Uninsured drivers will likely have their vehicle seized (and potentially crushed), receive a £300 fixed penalty notice and six licence points. Furthermore, uninsured motorists could face court and receive an unlimited fine and/or a driving ban. A criminal record can also affect job prospects.

So far this year, over 100,000 uninsured drivers have had their vehicle seized.

Ben Fletcher, Chief Customer Officer at MIB, said: “Put simply, uninsured motorists are very dangerous. They cause a worryingly high level of collisions and are frequently involved in wider crime. By using MIB’s Motor Insurance Database police can easily see if a vehicle appears to have no insurance and will take swift action to remove the threat. Op Drive Insured serves as an important reminder that no one is above the law and illegal motorists will be caught.”

Jo Shiner, Chief Constable at Sussex Police and NPCC Lead for Roads Policing, said: “Police officers take action against the users of uninsured vehicles every day, this national week of action really highlights how we work with all of our partners to take these vehicles off the road and prosecute offenders.

“We have sophisticated systems to help identify offenders and we will use all of our powers to take appropriate action against offenders and make our roads safer.”

Drivers can check their vehicle appears insured on police systems for free at www.askmid.com