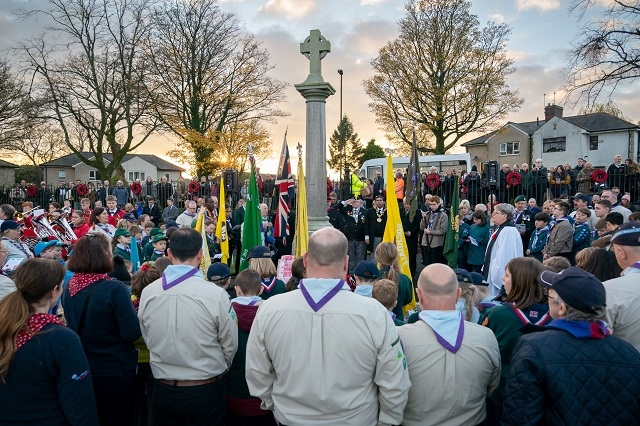 At the going down of the sun and in the morning, we will remember them: a moment's silence in Wardle for Remembrance Sunday

Thousands gathered across the borough for Remembrance Day Services to honour the nation’s war heroes and pay tribute to the fallen.

Communities fell silent as the Last Post was played and residents gathered for well-attended services. Each included Laurence Binyon’s 1914 poem For the Fallen: “They shall grow not old as we that are left grow old; Age shall not weary them, nor the years condemn; at the going down of the sun and in the morning; we will remember them.”

The Armed Forces community, councillors, local schools and members of the public also laid their own wreathes and gave respects, following moving readings of The Kohima Epitaph: “When you go home, tell them of us and say, for your tomorrow, we gave our today.”

Services to mark Armistice Day on Thursday 11 November were also held at Rochdale Cenotaph and in other parts of the borough as people gathered to show their respect for those who paid the ultimate sacrifice. 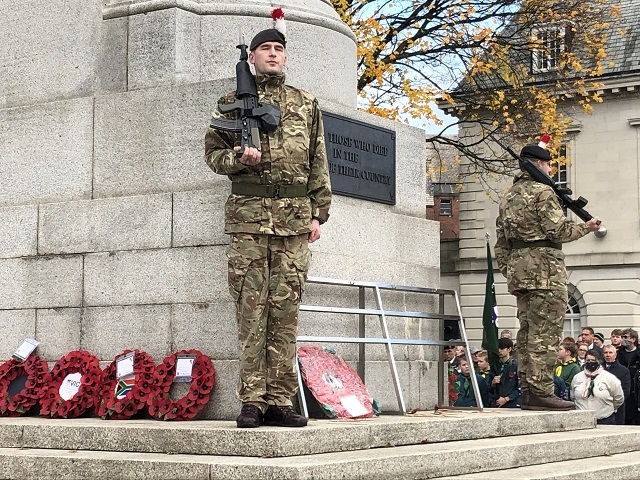 Councillor Sue Smith, cabinet member for the Armed Forces, said: “It was lovely to see so many people coming together again to pay their respects to the fallen.

“We are so proud of the work of our Armed Forces community, past and present, and the day was about honouring the service and sacrifice of thousands of men and women from our borough. It is thanks to their bravery that we enjoy the freedoms and we all too often take for granted. Lest we forget.”

The mayor of Rochdale, Councillor Aasim Rashid, said: “Remembrance Sunday is always an emotive and reflective day, as we came together united as one to pay tribute to our Armed Forces community.

“Without the selfless dedication and sacrifices of our Armed Forces personnel, the values and liberty we values so much would have been lost. Countless generations owe them a great debt, which is why the mayoress and I were so proud to lay wreaths across the borough in their honour.

“It was particularly moving to see residents of all ages paying their respects at services across the borough. We never forget; we will remember them.” 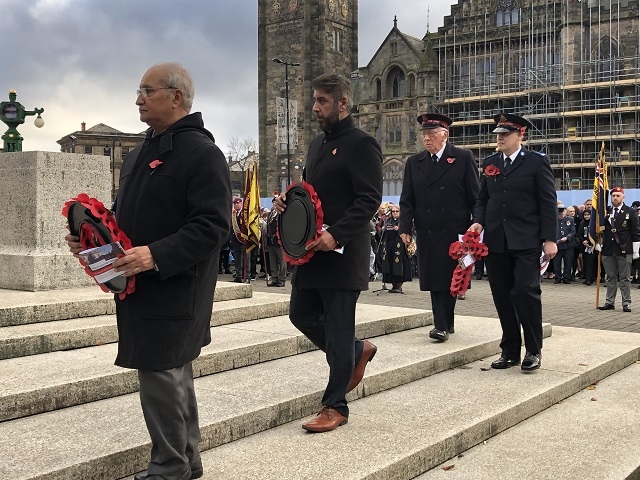 Ghulam Rasul Shahzad OBE added: “Indians, Hindus, Muslims, Sikhs, Christians and others served alongside the British Army in the First and Second World Wars. Thousands took part and many were killed or wounded: some were never found.

“Taking part in the parade allows us to remember all the fallen heroes. I would like to thank the British Legion, Rochdale Borough Council, all organisations and people of the borough of Rochdale, for providing us with the opportunity to take part in the Remembrance Day parade.”

Rochdale MP Tony Lloyd said: “Just as they were over a century ago, our armed forces have shown this year just how indispensable they are to the nation’s security. From supporting the frontline response to the Covid crisis, to evacuating 15,000 people from Afghanistan in just two weeks, the UK’s servicemen and servicewomen continue to play a central role to support and protect British interests and values.

“During remembrance, we honour and remember the sacrifices made by Rochdale service men and service women, veterans and their families, past and present.

“It’s vital we recognise their heroic efforts, whether that’s supporting the local poppy appeal, or passing on the understanding of its importance to the next generation. We must honour and remember their sacrifice.”

The council signed an Armed Forces Community Covenant in 2012 which is aimed at encouraging communities to support services that promote and encourage activities that help integrate armed forces personnel back into civilian life.

Current or former Armed Forces personnel can register for help or get more information by visiting www.rochdale.gov.uk/armedforces.

If they encounter difficulties when accessing services from the council or its partners email armedforces@rochdale.gov.uk or call the council on 01706 926 989.

Every Thursday from 9am – 10am the council hosts a veterans’ breakfast club at Touchstones Rochdale, alongside the council’s armed forces partners. All ex-military and dependents are welcome.