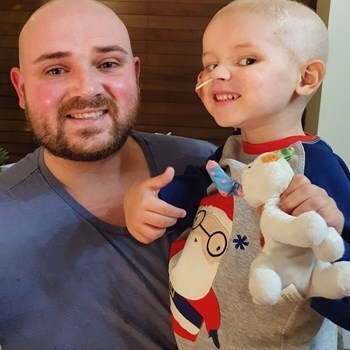 Chris Lowe with his late son, Freddie. Chris is running every day for a year to raise money in Freddie's memory

A Rochdale dad is running 5k every day for a whole year to raise money for charity in memory of his three-year-old son.

As of 1 January 2022, Chris Lowe has decided to run a distance of 5k each day for 365 days – including three marathons plus the Great North Run.

Chris, who lost son Freddie to cancer last year, is aiming to raise £5,000 for the Royal Manchester Children’s Hospital, which cared for Freddie, and the Rochdale Hornets Sporting Foundation, which aims to provide more opportunities for people – especially the younger generation – to play rugby league.

An avid Rochdale Hornets supporter like his dad, Freddie became poorly in late 2020 before being diagnosed with rhabdomyosarcoma, a rare type of cancer in the nasal area. He sadly lost his brave battle with cancer on 31 July after months of gruelling treatment.

Chris said: “After the great success of raising money for Young Lives Vs Cancer, I have decided to raise money in support of the intensive care unit and high dependency unit at Royal Manchester Children’s Hospital.

“This is where Freddie started his journey with cancer in October 2020. He would return months later to spend his final six weeks here. Vital funds are needed for this department, providing a bit of support towards equipment, materials and resources, to try and help support other very poorly children and families going through treatments and to try and prevent them from going through what we had to as no family deserves this.”

Last year, Chris launched a fundraising page ‘Thumbs up for Freddie’ in aid of Young Lives Versus Cancer, calling for donations to the vital charity, before running the Manchester marathon with his father, Desmond Lowe.

Chris continued: “We became very attached to most of the doctors and nurses whilst our time was spent on these wards. The love and care and support that was shown and given to us as a family and Freddie was incredible.

“These human beings do this for a job, a living, to go home and support their own families but in reality, they do it to help others: always putting others first, showing love for the children like they are their own, caring, comforting, loving in the best way they can, putting in extra hours, working beyond timelines.

“We appreciate everything these incredible people did for us and Freddie and now we feel we would like to try and give a little bit of support back in the best way we can. For some, the journey is only just starting.

“Freddie will be with us and remembered every second of every day and we thank you for everything you have done for us. You should be proud just like we are of you. Thank you, Royal Manchester Children’s Hospital, and thank you, NHS.”