You are Here: Home » News » News Headlines » An evening of culture at the Crown Oil arena

An evening of culture at the Crown Oil arena 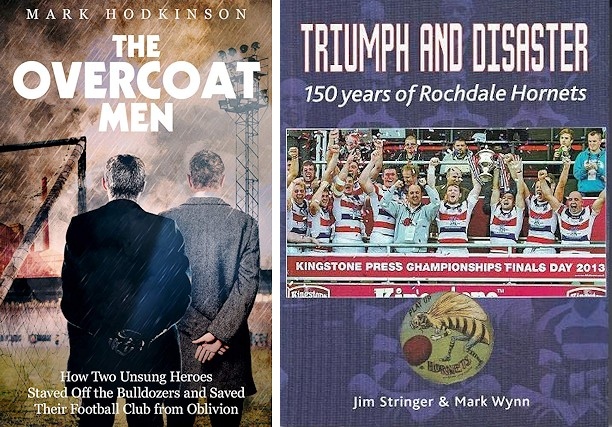 Rochdale AFC Community Trust is hosting an evening of culture next month as the Crown Oil Arena will play host to a live Q and A featuring local authors next month.

The event on 23 February, held in partnership with a number of organisations, will be headlined with a ‘ONE TOWN, TWO CODES’ question and answer sessions, focusing on the history of football and rugby league in the town.

Mark Hodkinson, author of The Overcoat Men, which focus on historical events at Rochdale AFC, will be part of a panel that also features former Hornets chairmen Jim Stringer and Mark Wynn, who recently released their book Triumph and Disaster.

The Overcoat Men describes how two unsung heroes, David Kilpatrick and Graham Morris, were able to save the football club from extinction, while Triumph and Disaster documents the 150-year history of Rochdale Hornets, with a behind-the-scenes look into the inner workings of the rugby league side.

Mark Wynn spoke ahead of the event, saying: “Both Jim and myself have been overwhelmed by the response to Triumph and Disaster 150 Years of Rochdale Hornets, and we are really looking forward to discussing the major milestones captured within the book, plus some of the tales and stories that didn't make the printed page!”

Rochdale AFC chairman Simon Gauge will also be on the panel, to provide a fascinating insight into the workings of a modern professional club.

Those attending the evening will also be able to hear from Your Trust Head of Culture Mark Doyle, who will give a special preview of the upcoming exhibition at Touchstones Museum. The 2022 Football Art Prize Competition.

Parallel to that exhibition, artists Alan Ward and Neville Gabie, both of whom have a long history of football-related arts projects, have been commissioned by Touchstones Museum to lead on a project specifically related to Rochdale AFC.

Their work has two distinct parts. They are inviting contributions from anyone in the community to create an exhibition in the gallery of 100 items/stories celebrating Rochdale AFC’s 100 years in the football league.

Hornets Foundation, who completed a heritage project in 2014, will have on display items from the heritage room at the stadium, as an example of items and stories that are looking to be unearthed from Dale fans.

The two artists are also developing a community project to re-create the first-ever commercially recorded football song - ‘Pass! Shoot!! Goal!!!’ by Rochdale's own Gracie Fields. As part of their commission, Alan and Neville are looking to re-record the song featuring Dale fans alongside local choirs and community groups that represent the diversity of Rochdale.

Tea and coffee will be provided on the evening as well as nibbles, courtesy of London League Publications who are the sponsors of the evening.

There will also be a raffle, with funds being split equally between local charities Rochdale AFC Community Trust and Hornets Foundation.

Proceedings will kick off at 7.30pm on Wednesday 23 February in 'Our Spot' (the former Studds Bar) in the Pearl Street stand, with the event expected to last around two hours.