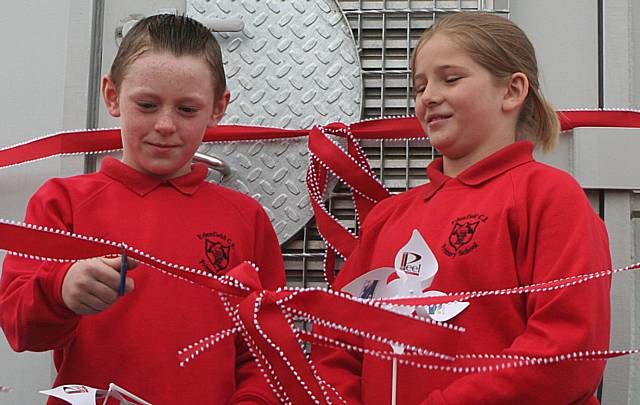 The controversial Scout Moor Wind Farm was officially opened today. The Edenfield moorland wind farm will generate enough power to supply the needs of 40,000 homes, which is the equivalent of roughly half the houses in Rochdale.

Peel Wind Power Ltd, the developers of the site, welcomed dignatories from across the North West to the official turn on and children from Edenfield Primary School, who have enjoyed lessons based around the wind farm, were on hand to cut the ribbon at Turbine One this afternoon.

Richard Dibley, wind power development manager at Peel, said at the opening: "We have welcomed people here today to thank them for their patience and understanding during the construction period and for them to see the wind farm in action at close quarters. I think we have chosen the perfect site here as it is more than 50% windier up here than it is in the surrounding area. These turbines will be generating power for years to come using a natural resource that will never run out."

Head Teacher at Edenfield Primary School, Janet Reidy, said: "It is superb for the children to be involved today after all the work they have done about the wind farm in their lessons. I think they will all remember this in future years and now they know what it's like to be film stars with all the camera crews here!"

Construction on the wind farm began in 2006 when Nordex was appointed to manufacture the wind turbines from its German factory.

Opposition to the development had been fierce since Scout Moor was first identified as a possible site for a wind farm. Rochdale MP Paul Rowen was against the development and Norden residents set up a campaign group, Friends of Scout and Knowl Moor, to retain the area as common land.

The 26 wind turbines, which generate 65MW of electricty, can be seen on the skyline at Knowl Hill from across the town and even viewed from the other side of Manchester.

However, all of the guests present at the opening today, which included a group of walkers, were happy with the development and the roll it will play in tackling climate change and cutting greenhouse gas emissions.

This Saturday the wind farm is hosting a family fun day, including tours of the turbines, between 10am and 2pm at the Owd Betts Pub on Edenfield Road.