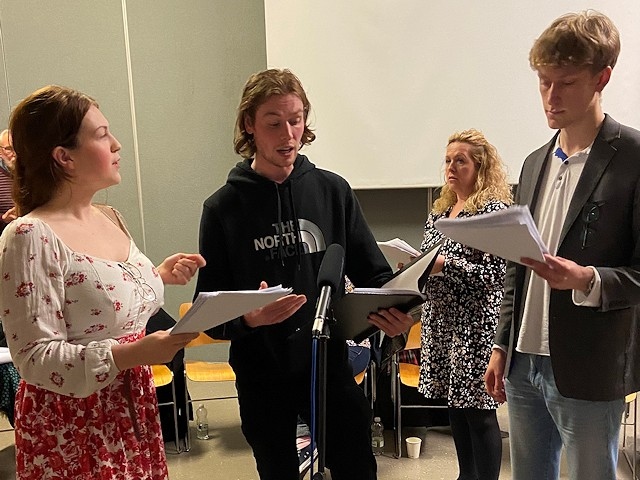 A group of local actors have had their first read-through of a new play - Cotton Famine Road.

The play, which tells the story of Rochdale mill workers during the 1860s, had its first observed readthrough at Touchstones Rochdale on Wednesday (27 April). Actors from local theatre groups performed selected scenes to an audience of representatives from Rochdale Council and local arts organisations.

The play tells the story of Jessie, an Irish immigrant who struggles to keep her daughters fed and community together during the Cotton Famine. During this period the cotton industry in Rochdale ground to a halt due to the American Civil War and people in Rochdale came out in support of the abolition of slavery.

The story features a number of real-life figures including leading black activists from the time such as Sarah Parker Remond, a lecturer who toured Britain to rally support for the abolitionist movement.

John Bright, the Liberal MP and Rochdale mill owner, who opposed slavery in parliament and corresponded with US President Abraham Lincoln, also appears in the piece which incorporates verbatim quotes from their orations as well as extracts from contemporary Cotton Famine poetry, written in Lancashire dialect.

The script is being written and produced by Mick Martin and Jude Wright from Bent Architect theatre company, following the tour of their recent production Full English.

Mick Martin, whose previous works include Once Upon a Time in Wigan, England, Arise! and Broken Time, also wrote and directed the 2017 play It’s in the Blood, about Rochdale and Oldham’s heritage as rugby league towns. It was during rehearsals for It’s in the Blood that the idea for Cotton Famine Road began to take shape.

Local performer, Eleanor Kelly said: “As soon as I started reading about the Cotton Famine, I knew we had to create a piece of theatre about it. A lot of people in Rochdale have never heard of it and it's a real story of allyship that we ought to pay tribute to. I’m delighted that Mick and Jude have taken on the project and to see local actors breathe life into the script.

“The 1860s were a tumultuous time the world over and I don’t think enough people know Rochdale’s role in that. In the mid-19th century, clothes were Britain's biggest export and that industry was reliant on enslaved Africans in America. The damp, temperate climate of Lancashire meant cotton could be spun there and those threads inextricably linked us to the Confederate South.

“So when the war came and the Unionist states established a naval blockade, the lack of cotton exports was felt in Rochdale. Industry ground to a halt and people were left destitute.

“Against the backdrop of a neutral British government and business owners in Liverpool openly arming the South, it would’ve been easy to side with the Confederates.

“It was a conversation about economics, principles and faith and Rochdale was one of the few places to come out in support of people 3,000 miles away. People here starved and yet most of them felt so strongly about slavery that they chose solidarity.

“We’re having all these conversations about race today and it feels incredibly poignant to be able to look 160 years into the past and see such a clear example of allyship.”

Mick said: “I met Eleanor a few years ago on a previous project after which she suggested I look at the cotton famine and Rochdale's unique role in that I was immediately intrigued, it's not just a powerful story, it's also a very relevant one to this day and age too on many levels.

“It's a story of working-class people abandoned by the state to go hungry and suffer, of working people banding together to stand up for a principle, people who made common cause with the men and women and children in the slave fields of the American south despite immense hardship.

“It reaches across time, geography, and cultural boundaries, from the 1860s right up to today, from the cotton mills of Lancashire right across to the slave fields of the US to speak of human dignity and compassion, a story Rochdale should be very proud of.”

The piece has been supported by Arts Council England throughout its research and development phase and has recently received a grant from the Granada Foundation, alongside support from local organisations including Touchstones, the Rooley Moor Neighbourhood Forum and Cartwheel Arts.

The team behind it is currently looking to secure further funding, with a view to staging the play in Rochdale next year, as part of a wider arts project exploring the Cotton Famine.