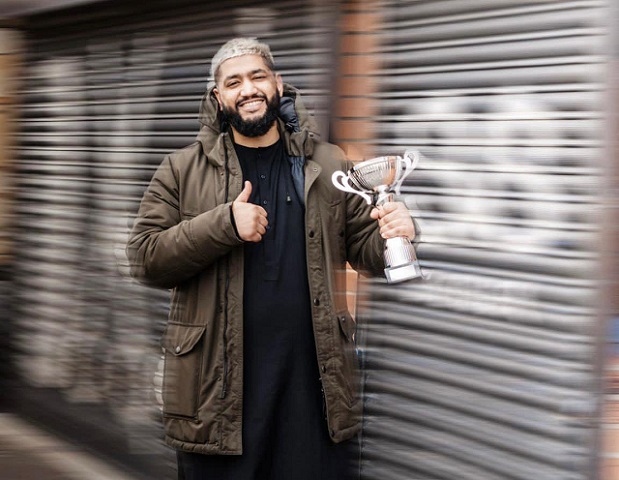 Serwez Khan with his trophy

A Rochdale barber has been crowned the winner of the barber battle at this year’s Great British Barber Bash Manchester.

Serwez Khan, who owns SVS Barber on Yorkshire Street, Rochdale, beat over 70 opponents to the title - and the coveted 'fastest fade trophy' - after having 20 minutes to create the best fade and overall haircut at the busy Victoria Warehouse event last month.

Five judges whittle down the competition to the top 10, then the top three, having scrutinised every detail from competitors, including celebrity barbers and other competition winners. Competitors must create the cleanest fade within the allocated time limit, with the overall styling and finished look of their model also taken into consideration.

Serwez, 33, said: “When we got down to the final three, judges called me onto stage, gave me a trophy and £1,500 worth of prizes. I’ll also be featured in their magazine, The Barber. It’s bragging rights, really!

“It’s a high-class competition which attracts people from all over Europe, and I didn’t think I’d win. I’ve entered in Amsterdam and Liverpool before – although I didn’t compete [in Liverpool] due to illness – so this was closer to home and third time lucky.”

Serwez holds an NVQ level 2 in hairdressing after qualifying at Hopwood Hall College. From there, he built his experience barbering before opening his own shop around four-and-a-half years ago. He has over 10 years of experience in the trade.

He added: "My father, Javid Aslam, is my inspiration. He pushed me to get where I am today."

The Great British Barber Bash is an annual contest which takes place in major cities such as Amsterdam, London, Manchester, Glasgow and Liverpool.