You are Here: Home » News » News Headlines » Middleton Independents Party councillor defects to Labour less than a month after elections 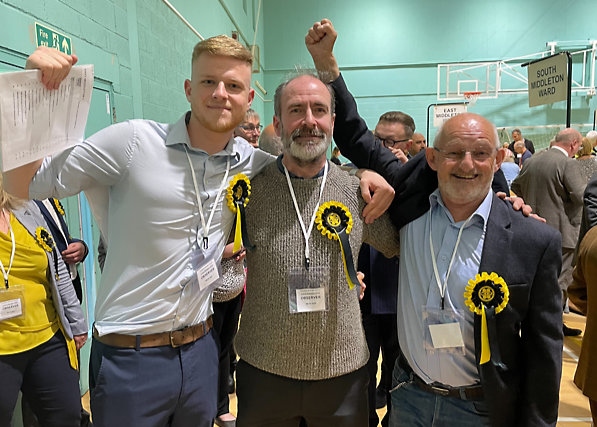 Middleton Independents Party’s emergence from nowhere to take five council seats was the stand-out story of the local elections in Rochdale this year.

Only formally registered as a political party in March, the group fought on a ‘Middleton first’ ticket, tapping into local discontent over the town playing second fiddle to Rochdale.

It proved to be a highly successful strategy in East Middleton, where ‘MIP’- as they are now known – swept aside the Labour incumbents to install a trio of independents.

With MIP taking two seats in North Middleton it made them the third largest group on the Labour-run council.

But less than three weeks later, the fledgling party has been rocked by the defection to Labour of East Middleton councillor Dylan Williams.

Councillor Williams departure comes amid a flurry of startling accusations against his former colleagues – including bullying and sympathies for other political parties – all of which have been strenuously denied by MIP.

Labour has naturally welcomed the defection, praising their new recruit as a ‘very hard-working and enthusiastic young man’.

But what do voters think of his decision to swap political colours less than three weeks after being elected?

The Local Democracy Reporting Service, visited his East Middleton ward and found opinions ranged from anger and disillusionment to delight.

Steve Booth, 50, from Birchwood Road said it was a councillor’s ‘prerogative’ to move parties, but wasn’t overly impressed with Councillor Williams’ decision.

“If you run on an independent ticket it’s not really that ethical to switch horses two weeks later,” he said.

But if political differences were the ‘genuine reason’ for the move, he had some sympathy.

“I’m left of centre,” said Steve, who works as a psychiatric nurse. “I understand if you suddenly realise you are in a right-leaning situation that you don’t see any future in, you have to be up-front and honest about it.

As a Labour voter, however, he admitted not being ‘too upset’ about the situation.

Those sentiments were shared by Mark Horton, also of Birchwood Road.

“I’m a Labour voter, so it’s a bonus for us in my opinion, It brings the ward back under some Labour control.”

He added: “I have got a little lad and under this Conservative Britain he is struggling like hell, he has got a bad heart and is struggling to get treatment for things.”

On Councillor Williams’ claims over Tory-sympathies within MIP he said: “I can believe that, you don’t suddenly become an independent from nowhere, do you?”

“I think for him to do that is absolutely disgraceful, why would he even do that?” said John, who voted for all three MIP candidates at the local elections.

“I think it’s terrible. To stand as an independent you must have some sort of idea you want to be an independent and not Labour or Conservative. Why would you defect to another party?”

“That’s not good, I just don’t think it’s a good thing to do,” says Margaret, a shop worket.

Tom Kramer, of Kenyon Lane, felt Councillor Williams should continue as an out-and-out independent or stand for re-elections as a Labour candidate.

“In the campaign he was having a go at Labour and that was the whole point of the independents – because people felt they had been mistreated by a Labour council,” said the 26-year-old building surveyor.

“I think people have been let down because they genuinely believed they were voting for something a bit different. I know for a lot of people it was a protest vote against the CAZ and all that – so to join Labour is the complete opposite to his manifesto and pledges before the election.”

Meg Martin, also of Kenyon Lane, was happy to have a new Labour ward councillor, however.

“I have always been a Labour supporter – ‘for the many, not the few’,” said the 25-year-old photographer.

But her views were in stark contrast with those of Glynis Oldham, of Birchwood Road.

“I’m very disappointed,” said Glynis, 72, who voted for all three MIP candidates at the elections.

“I feel like my vote has been wasted now, I needn’t have bothered going out to vote, that’s my opinion.”

Glynis, who is retired, added:“We thought someone was honestly going to come and do something. We don’t see anybody else regarding litter, parking, speeding and different things on the estate.”

Her husband Tommy said it was ‘terrible’ that Councillor Williams had felt the need to switch parties – and blames MIP for the fall out.

The 75-year-old added: “I’m not annoyed with him, I’m annoyed with the rest of them. He is trying to change things.”

Councillor Williams has made a public statement on his Facebook page explaining the reasons for his defection to Labour.

He writes: “When I joined MIP, I joined the party on the basis that it was a party of true independent candidates – free from party politics and political game playing. A party of people, who like myself, just wanted the very best for Middleton – a town I deeply love and have lived in since birth.

“However, recent unprofessional behaviour by senior MIP party members – ageism, bullying, links to other parties, infighting and changing the party from being a party of independent candidates to a tightly controlled whip has forced me to rethink where I stand in the party.”

Councillor Williams adds that after being elected he ‘hit the ground running’ and began doing ‘positive things’ in residents’ interests.

His statement continues: “At a recent MIP members’ meeting, I was heavily reprimanded by senior members of the party for publicising the work I have been doing as a councillor on behalf of East Middleton residents which they said, ‘makes other MIP councillors look bad as they aren’t doing as much work’.”

He cites ‘constant barracking’ by party chiefs at a recent meeting to the point of ‘bullying and intimidating behaviour’. Councillor Williams claims he was then not allowed to leave fter a ‘very senior member’ refused to unlock the door for 25 minutes. He is taking advice on whether to report the incident to the police.

Councillor Williams also claims the political nature of the party is not as he expected.

“I’ve also come to realise that most MIP candidates, and I must stress not all of them, are Conservatives, and very much on the right of politics, who could never be elected in Middleton if they stood as Conservatives,” adds Councillor Williams.

He rounds off by promising to ‘continue to work 110pc for East Middleton as a Labour Party councillor for the remaining two years of my term in office.”

MIP leader Councillor Lee Wolf says his party has been left ‘saddened and surprised’ by Councillor Williams defection – and ‘shocked’ by his allegations.

In an official statement, he adds: “The party refutes any allegation of bullying and will welcome any investigation. In his social media statement, Councillor Williams has inaccurately stated that most Middleton Independents candidates were Conservatives, this was not the case.

“Our candidates were all members of Middleton Independents Party and were obliged during selection to confirm any other party or union affiliations. All candidates confirmed no other party affiliations, including Councillor Williams.”

Councillor Wolf expresses regret that Councillor Williams ‘chose not to formally raise any issues for investigation, and ultimately felt he couldn’t be a member of Middleton Independents Party’.

But he adds: “This means that Councillor Williams cannot honour his commitment to the people of Middleton, and in particular the people of East Ward.”

The MIP leader is now calling on his former colleague to stand for reelection under the colours of his new party.

“Now that Councillor Williams has decided his loyalty lies with the Labour Party, we expect he’ll do the right thing by his electorate and stand for Labour in an East Ward by-election,” he continues.

“Middleton East Ward residents who chose to vote for us instead of a national party candidate, can be reassured that today’s development will not deter us from our commitment to you. We’ll be working even harder to deliver on the promises we made during our campaign.”

“We welcome Councillor Dylan Williams to the Labour Party and we will support him in everything he does,” Councillor Emmott says in a statement.

“He is a very hard-working and enthusiastic young man who is already doing good things for his community and he is an excellent ward councillor.

“It would appear he has had something of a poor experience with the Middleton Independents Party where it seems he was criticised for actually working too hard and publicising his hard work because it made the rest of them look less hard-working.”

Councillor Emmott adds: “I can assure Dylan that the kind of enthusiasm he has shown is welcomed in the Labour Party and he will receive full support and encouragement from us.”

Rochdale council has 60 elected councillors. There are currently 43 Labour, 10 Conservative, 4 Middleton Independents and 3 Liberal Democrats. The Labour Group has control of the council.