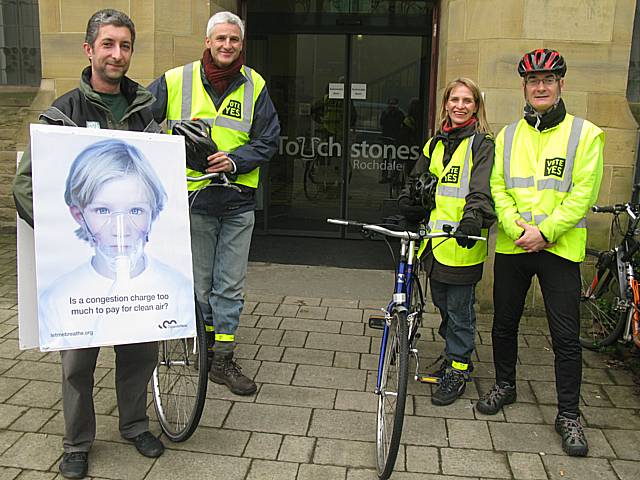 Campaigners in favour of the congestion charge have said “on your bike” to motorists.

Cyclists from Rochdale got on their bikes and rode across Greater Manchester on Saturday (November 29) – to promote anti-congestion transport, and to encourage a “yes” vote to the charge.

A spokesperson for Clean Air Now, an anti-pollution campaigning body said: “We believe that the TIF package will be good for motorists, public transport users, cyclists, pedestrians - and for air quality. Reducing traffic congestion helps not only drivers but will encourage more people to cycle in Greater Manchester.

“Since the introduction of the congestion charge in London in 2003, cycling levels in the capital have nearly doubled.”

Wera Hobhouse commented: “It’s good fun to campaign for something you believe in, together with like minded people.

“Our Vote YES jackets attracted a lot of attention, some positive and some negative. The best comment, as we struggled up the hill, was someone shouting from behind his wheel: “Buy yourself a car”. "

William Hobhouse said: ‘We just want to get a real debate going. Road traffic levels are now eight times what they were in 1952.

“Cars are going to get cheaper and they will get cheaper to run as manufacturers respond to the demand for greater and greater fuel efficiency. Congestion is going to get a lot worse. This referendum is about whether we invest in alternatives to the car”.