You are Here: Home » News » News Headlines » Conservatives say no to TIF

Conservatives say no to TIF 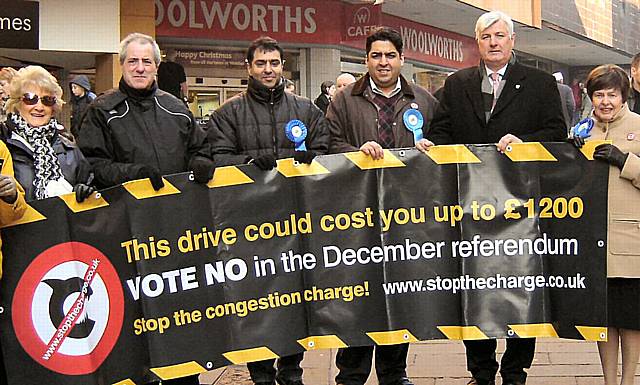 One of the faces of the 'Yes' campaign visited Rochdale this week to promote a 'yes' vote in the Greater Manchester Passenger Transport referendum, while the local Conservatives were campaigning against the Transport Innovation Fund and subsequent congestion charge over the weekend.

Tommy Walsh, from the Greater Manchester Pensioner’s Association, has become an unlikely celebrity appearing in dozens of adverts and billboards promoting the bid that supporters believe will revolutionalise public transport in Greater Manchester.

Conservatives from across Heywood, Middleton and Rochdale were on Yorkshire Street on Saturday (29 November) campaigning against the Congestion Charge, saying that everyone will be hit when the scheme is introduced.

Conservative 'No' Campaign Team Leader Mudasir Dean said: “Despite denials by its supporters, congestion charges will hit everyone. Just getting to work in Manchester by car will cost over £1,000 a year more. Businesses in Manchester and delivery companies will have to pass on their increased costs to all customers, including those in Rochdale.

"Submitting and promoting the Congestion Charge bid has already cost around £15million. How much better if that had been spent on real improvements to public transport? This expensive advertising campaign supporting congestion charging is absolutely wrong.

"Everyone will pay more either directly or indirectly. Students, those on low incomes, single parents and pensioners alike, no-one will fully escape the impact of congestion charges.

"What would we achieve in Rochdale if the people of Greater Manchester were conned into voting for this ridiculous tax? The possibility of a few extra re-conditioned railway carriages - we are not even promised new ones - on some peak period trains."

Responding to the Rochdale Conservative's claims, Lis Phelan, chairman of the Yes Campaign, said: “Rochdale Conservatives are deliberately misleading local residents. A Yes vote will deliver an expanded bus network with more services earlier in the morning and later at night, more Sunday services, capped fares and simpler ticketing. A Yes Vote also means Rochdale’s new tram line will be extended into the heart of the town, whilst every single peak time train running into Manchester will have at least one extra carriage – that is 7,000 extra seats at rush hour across Greater Manchester. Every low paid worker will also get a 20 per cent discount on all peak time public transport journeys.

“For businesses, every piece of research carried out shows that the financial savings from more efficient delivery times and an accessible, reliable workforce outweighs the cost of the charge. But perhaps the sector of Rochdale’s community who will benefit the most is the 33 per cent of residents who don’t have access to a car, relying completely on public transport for access to jobs, health care, friends and families.”

Meanwhile, Mr Walsh visited Rochdale's own celebrity pensioner, former MP Sir Cyril Smith, and explained what he believes to be the benefits of voting ‘yes' in the current referendum. “I am voting yes for a variety of reasons and it’s clear that for pensioners, this is a win – win situation," he said.

"Many pensioners are put off from using public transport, even though they have free passes, mainly because they don’t feel safe. This bid, if successful will make our buses, trains and trams safer, cleaner and more frequent. If you're tired of waiting for buses or trying to get a seat on a packed train or tram, or find that your journey to work is taking too long, then the congestion charge will make a big difference to your life.

Former Rochdale MP Sir Cyril Smith MBE said: “I will support anything that will improve Rochdale and it is clear that the benefits of this bid will lead to huge improvements in public transport. Rochdale has suffered from a below par transport system for far too long and I feel that this bid will change that. Benefits include bringing Metrolink into the heart of our Town, a new stop at Kingsway Business Park, huge, much needed improvement to our bus services and a whole lot more. Rochdale gets a good deal from this bid and we need to support this once in a lifetime opportunity."

Voters have until 11 December to send in their ballots for the referendum.