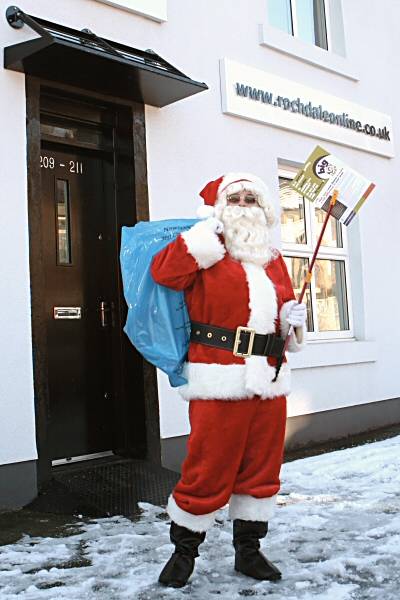 Father Christmas was only at the Rochdale Online office last week, helping out with the Big Clean

A teacher has been banned from a primary school after telling children that Father Christmas wasn't real.

A class of seven-year-olds were left with their dreams dashed when the supply teacher blurted out that their Christmas hero was in fact made up, and it was mums and dads who really left presents under the tree.

Furious parents stormed into the school and made complaints after the youngsters told them what they had heard, and an apology was sent out by the head teacher, Angela McCormick.

The woman teacher has been barred from working at the Blackshaw Lane Primary in Royton, Oldham and a complaint has been lodged with her agency.

Confused children have now been given extra lessons on Christmas and have sent letters to Santa.

A spokesman from Rochdale Borough Council said: “I can confirm that the teacher was employed by the Rochdale and Oldham Supply Agency.

"As part of our investigation into the matter, we have spoken to the school who have asked that the teacher is not used for future supply work at Blackshaw Lane Primary.”

The apology letter from the school read: “Profuse apologies to all our Year 3 children and parents.

"I have spoken to the supply agency concerned and have completed a complaint form. The children are unscathed and are back on track thanks to the ‘magic’ of our resident staff and the lovely snow we have all appreciated this week.”