From puppies to police dogs - a trainer's diary (Week six) 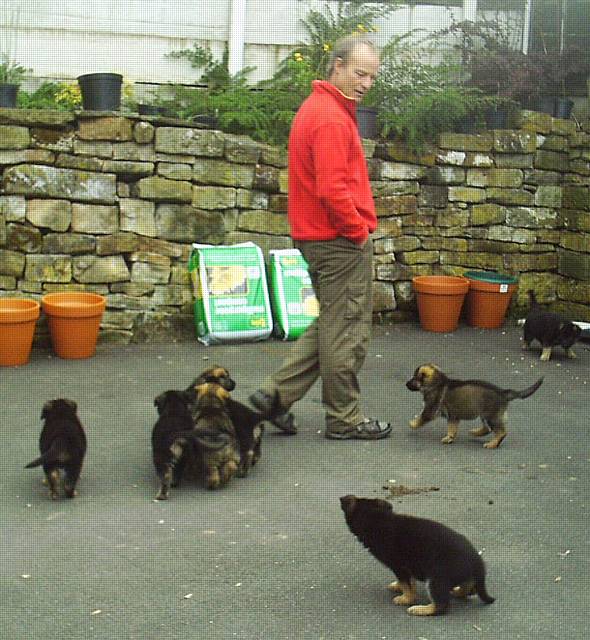 "Normally puppies have their first injection at eight weeks of age but Jan, the breeding manager at Merseyside Police, asked if we could take the pups for their first injection at six weeks so that they would have some protection when going to their new homes. Most of the puppies are to go to dog handlers who already have police dogs, which could increase the risk of exposure to infectious diseases.

"So Peter and I called the pups together and loaded them into the van. They didn't seem to mind being put into the cages with three or four pups in each cage. In fact the journey was fairly peaceful due to the fact that each group had a large meaty marrow bone to occupy them. However once in the vets surgery they demonstrated their lung capacities to such an extent that the vet had to take each one into another room to listen to its heart.

"The following day Chris and her husband, on instruction from Merseyside Police, came to tattoo the puppies' ears. The pups coped quite well with just a squeal as the needles are stamped into the ear flap. Now each puppy has a number on the underside of the ear flap. The number is registered with the National Tattoo register so that it can be identified which helps to prevent theft and can also be used to trace the owner if the dog goes missing. Not all Police puppies have this. At Greater Manchester the dogs are microchipped instead.

"Next week the puppies will be put through the Puppy Character Assessment and then selected for their new homes."