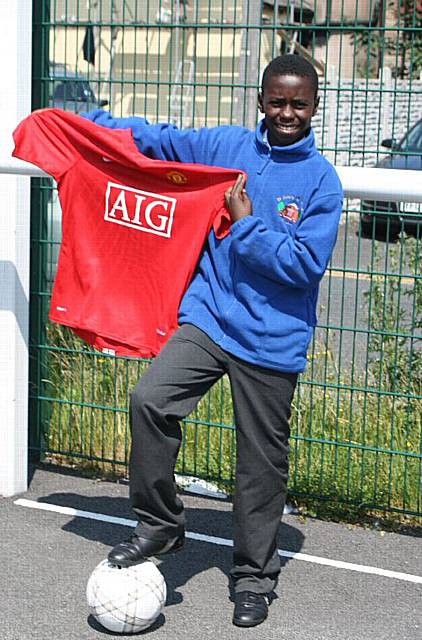 Score! Axel is getting ever closer to working with his dream team

For most 11-year old boys, playing for Manchester United is a far-away fantasy.

But for Axel Tuanzebe, from St John’s RC Primary School, it is a dream which is well within grasp.

The gifted young sportsman has already been signed up by Manchester United, and shares his training ground with the most high-profile Man U celebrities.

Having met all the players and been to various training camps, Axel is hoping to one day join his dream team as a full time career.

Mayor of Rochdale, Councillor Keith Swift, last week awarded the him with the sports boy of the year award at a school ceremony.

Speaking to Rochdale Online News about his dreams, Axel said: “I met all the players at different training camps.

“I love football and I really want to stay playing for Manchester United until I am old enough to join the main team.”

“I’ve been training him since he was in year three and he really has what it takes.”

He added: “There is a contract from Man U every year, and the longer he stays in, the more chance he has at making it with the main team.”

“I really think it could happen for him.”