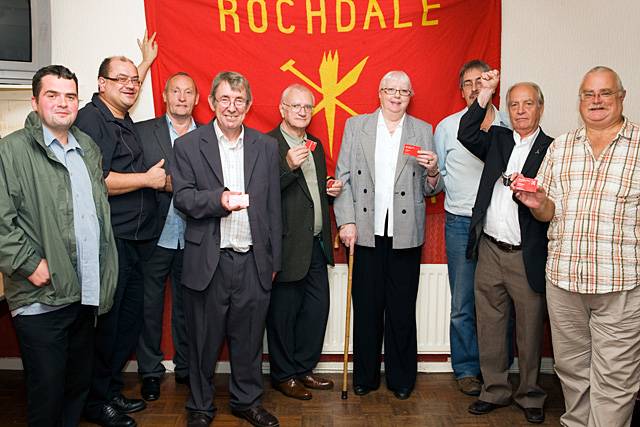 Former Mayor of Rochdale Councillor Robin Parker has resigned from the Labour party as a direct result of the ‘Rochdale Seven’ being found guilty of bringing the party into disrepute and reading “evidence of Simon Danczuk’s [whose complaint instigated the proceedings] domestic violence.”

At a press conference at Rochdale Labour Club following the verdicts – five of the seven were expelled from the party, two, Dave Lee and Margaret Nicholl, were suspended – Councillor Parker said: “The seven wrote a letter because they were concerned at allegations of domestic violence by Prospective Parliamentary Candidate (PPC) Simon Danczuk, whilst on holiday last year [August 2008], they wanted those allegations thoroughly investigated.”

Mr Danczuk and his young mistress, Karen Burke, went public to deny the allegations in an article in the Rochdale Observer in January this year. In the article Mr Danczuk “slammed” the allegations as “vicious mischief making.” Adding that claims that he hit Ms Burke were “totally untrue – an absolute nonsense”.

Ms Burke was said to be distressed by the accusation which she is quoted as describing as “very offensive”.

Mr Danczuk accused people within his own party of being responsible for the attack on his character and said they can be “quite bullying” with a “reputation for being a difficult constituency Labour party”.

This accusation motivated a letter to the newspaper signed by six local party members stating that they believed the claims of bullying had been made because of a request “for a full investigation of allegations made against Mr Danczuk”.

The signatories, Jack Brassington, Michael Cummings, Maureen Nicholl, David Lee, Mark Hollinrake and Michael Coats, along with former Councillor Tom Stott, were charged within having brought the Party into disrepute.

Councillor Parker said: “The seven were right to call for an investigation. From the evidence I have read, in the form of an affidavit by Steven Burke [brother of Karen Burke] and a written statement by Sonia Milewski [Mr Danczuk’s estranged wife] I believe the position of Simon Danczuk as PPC is untenable.”

Councillor Parker read in full the witness statements provided to the hearing by Steven Burke and Sonia Milewski (extracts below).

In his affidavit, Mr Burke, who was formerly Mr Danczuk’s campaign manager charged with getting him elected, says: “I received a phone call off my father telling me that Simon Danczuk had hit my sister, Karen Burke, and had dumped her and my niece and nephew at Alicante Airport with no money and no food. I left my girlfriend’s house and returned to my father’s flat. When I got there I asked my father for further information and he elaborated and said Simon Danczuk had dragged my sister across the floor and hit her and ripped a gold dress that she was wearing. My mother was in contact with Karen by mobile phone and she received several text messages from my sister which included the phrases, ‘I can’t believe he has done this to me’ and ‘I have never been so scared in my life’.

“When they arrived back it was approximately 1.00pm. I received a phone call from my father who had gone to pick them up stating he had picked Karen up. I asked, ‘how does she look?’ He said, ‘shaken and she has bruises on her arm’.”

Asked why he had resigned Mr Burke said: “Because he [Simon Danczuk] hit my sister and I was then threatened with legal action for telling people.”

Ms Milewski in her statement reiterates what her seven-year-old daughter, who was with Mr Danczuk and Ms Burke on holiday and in the room at the time of the alleged assault, told her: “Late August 2008, my husband Simon Danczuk took our daughter Marymartha on a 10 day holiday to Spain with his girlfriend - Karen Burke, Simon and Karen's son Milton and Karen's young relative Ebony.

“The day they arrived back from their holiday, I collected our daughter from Simon's home. Before I had the opportunity to start the car, MaryMartha began to cry uncontrollably and became very distressed regarding the whereabouts of her passport; she was in a real state of panic and very restless. I tried to ask her what the matter was, but all she would reply is 'please mummy get my passport; find it, find it now', so I got out of the car and knocked on Simon's door and asked where her passport was. Simon told me it was in her suitcase in the back of my car and that it was safe. I then asked Simon why on earth our daughter was so fraught and crying over her passport and he said 'oh it’s nothing, nothing at all' and then shut the door on me.

“We drove home, but literally 90 seconds after I started to drive, Marymartha began to panic and cry uncontrollably again. To this day I have never seen her in what can only be described as a sheer state of fright, a bag of nerves, such strong emotions, and very fearful. Our daughter was inconsolable. So I stopped the car, got out and got her passport and then began to hug her, and ask what had happened to make her feel, and cry, like this.

“She said 'please mummy, please don't make me go to see Daddy again, I don't want to see him any more'.

“I asked why she was so frightened and why she needed her passport and she told me that it was a horrible holiday, and that all Karen and Simon did throughout the holiday was shout and row with each other. Then she told me that after a major argument, Karen stole hers' and Simon's' passport and ran off with them and told them both that she was going to burn them so that they couldn't get home.

“I asked how they got the passports back, and she said that Karen came back to the apartment said sorry and gave them back.

“I asked if that was the reason why she didn't want to see her Daddy any more, and she said no, it's not that, it's because Daddy and Karen were hitting each other.

“Marymartha then continued that on day seven of the holiday, Daddy and Karen had a big row and they were rowing all day. Because of the constant arguments Karen wanted to sleep on the sofa and let Marymartha sleep with her dad. Simon wanted Karen to sleep with him, the row became very intense and Karen lashed out at Simon, struck him several times and tried to push him off the balcony. Simon retaliated and struck Karen back, she fell to the ground and then he proceeded to drag her from room to room by her arm and her hair, collecting her belongings along the way. Then he physically forced her out of the apartment along with her belongings. She then banged on the door repeatedly, begging to be let back in crying that she had no money.

Having read out the witness statements, Councillor Parker reiterated that Simon Danczuk’s position as PPC was no longer tenable.

Councillor Parker said that he had not resigned lightly; having been a member for 35 years, he said he found it hard to believe he had been pushed into this position. He added: “The Labour party still has the opportunity to deselect Simon Danczuk and choose a more suitable candidate. I would call on Simon Danczuk to stand down but I doubt he would and so call on the National Executive to force him to do so.”

Councillor Parker is not alone in resigning; a number of local Labour party members are also doing so. Mick Cummings, one of the five expelled said: “Simon Danczuk has ensured there will be no ‘foot soldiers’ for the local Labour party.

Mick Coates said: “The hearing was a ‘show trial’ that Stalin would have been proud of.”

Maureen Nicholl, a member of the party for almost 50 years, and one of the two suspended, said: “We sat there for three days but we all knew what the result was going to be, it had already been decided.”

Another of the five expelled, Mark Hollinrake said: “Simon Danczuk’s campaign is based on Paul Rowen buying his intern a banana, the people of Rochdale deserve better, they deserve a candidate who challenges Paul Rowen on policy not buying a banana.”

As the press conference ended, Jim Dobbin, MP for neighbouring Heywood & Middleton, arrived to offer his support and condolences. Mr Dobbin and Colin Lambert, leader of the Labour party on Rochdale Borough Council, had written to the Labour party asking for the hearing to be stopped and time taken to reflect – the request was ignored. Asked for his response to the verdicts, Mr Dobbin said: “I think the party has overreacted.” Mr Dobbin said he would take the case up with the party nationally.

Sonia Milewski, who had returned to her home in Darwen, speaking on the telephone, was furious saying: “Tell him [Simon Danczuk] that my daughter is not a liar, she was telling the truth, she still has nightmares about it now. If he wants to sue me for saying so he can try.”