You are Here: Home » News » News Headlines » From puppies to police dogs - a trainer's diary (Week one)

From puppies to police dogs - a trainer's diary (Week one) 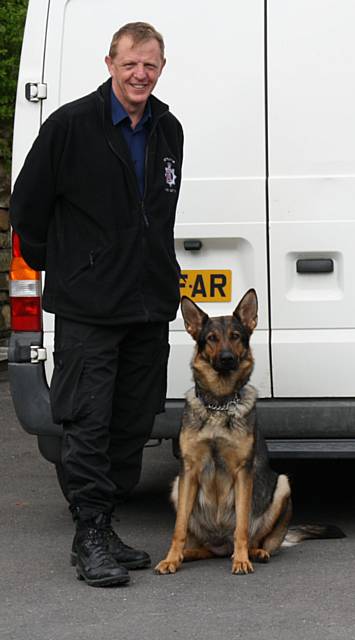 Earlier on this year we were asked by Essex police if we would be interested in whelping one of their brood bitches. The timing was just right for us to accommodate a litter and this particular bitch was my Pepper’s half sister so we gladly agreed. The sire to the litter was a Greater Manchester Police dog, Rio which I knew quite well as he had attended the puppy classes and been a very successful working dog. This was definitely a litter I was interested in.

On Bank Holiday Monday Dave and his sergeant travelled up to Rochdale with a very pregnant German Shepherd named Xena. They unloaded all Xena’s belongings – food, bowls, bedding, puppy wormer etc. and Xena was allowed to explore her new home.
We knew this would be a testing time for Dave. He wanted to have Xena stay at home but work commitments meant there was no one around full time. The next best thing was for Xena to come to us and live as part of a family having her puppies in a home rather than kennels.

Dave said a final goodbye to Xena and as he drove away Peter took Xena off for a walk so that she did not see him leave.

Xena was easily distracted with tasty treats. She was a very confident, friendly bitch and she settled in very quickly. Every day Peter spent many hours with her getting her used to his company and being handled.

In the house we set up her whelping bed so that she could get used to sleeping in it. Xena soon opted for the warm comfortable bed at night but during the day when it was warm she would often lie on the cold floor to cool down.

The next thing we had to do was get her used to Peter being in the whelping bed with her because during the birth it may be necessary to assist and Xena had to be confident with Peter.

It wasn’t long before Xena was rushing into the box as soon as she saw Peter getting in.
During the week Xena got used to the daily routine of our household. She was always friendly and content so on Saturday morning when she got Peter up at 5.00am he knew something was happening. Xena was very restless. She was attacking her bedding never satisfied with the position of the blanket. She kept wanting to go outside so after she had been to the toilet we kept her in the kitchen and Peter got inside the whelping bed with her. This seemed to do the trick and at last she relaxed and lay by Peter. For the next three hours she was relatively calm but she did not want her breakfast.

Peter and I got all the whelping things ready – towels, hot water bottle, kitchen roll, small box with warm bedding, glucose and so on. We had the vets phone number by the phone just incase of emergency. Adam (our vet) even gave us his mobile number for out of hours call out which we were very grateful for.

Now all we had to do was watch and wait.

It wasn’t long before Xena stood up, arched her back and started to grunt as she pushed. Within seconds a small wet puppy emerged into the world. Peter gave it a quick rub and what a relief to see it take its first gulp of air.

The next few minutes were rather hectic as Xena lost all interest in the puppy and got out of the whelping bed. She walked around the kitchen cleaning herself but within a minute the second puppy was born. This puppy was very lively but again Xena showed no interest as she meticulously cleaned herself. Ten minutes later and another puppy was born. By now Xena was wary of the puppies crying and even started to avoid them. It was an anxious time so I slipped out and dashed to the vet to pick up some more substitute milk. If we had to hand rear a whole litter we would need the extra milk.
By the time I got back Xena was lying next to Peter in the whelping box and the puppies were feeding from her. Phew!

As long as Peter was with her she was settled and by the time the 4th puppy was born she had got the hang of things.

From then on things slowed down a little and Xena gave birth to a total of 12 puppies by about 7.30pm. We stayed up with her as the first night is always a critical time. During the night two of the small puppies died leaving 10 puppies, 5 females and 5 males. This was still a large litter for a first time mum to rear but they seemed fit and healthy so fingers crossed.

Throughout her whelping we were sending text messages and getting calls from her family in Essex. It was hard for Dave being so far away but we were able to email photos and hold the phone next to the puppies so that his family could hear their little puppy cries.

If these puppies thrive over the next few days then we can all relax a little as they will have survived the most critical time.