You are Here: Home » News » News Headlines » Sign of the times for world capital of Co-operatives

Sign of the times for world capital of Co-operatives 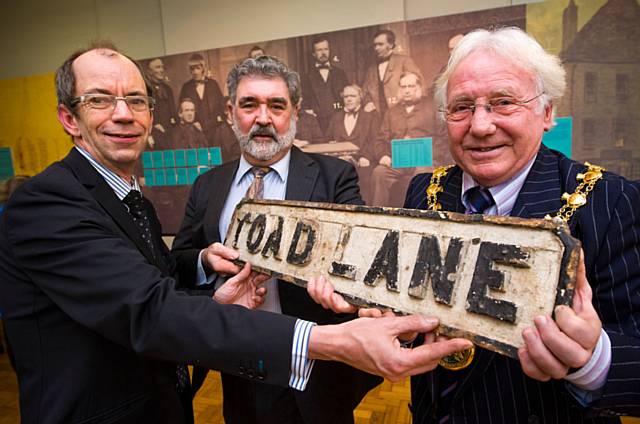 A historic symbol of Rochdale’s rich heritage has returned to the borough after an absence of almost 20 years.

The original Toad Lane caste iron street sign that was in place when the Rochdale Pioneers founded the first ever Co-operative store in 1844 has been officially handed back by a former Rochdale councillor.

A special ceremony at Touchstones on 21 December, the anniversary of the opening of the Pioneers’ store 167 years ago, saw David Williams, once Chairman of the Rochdale Co-op Party, present the sign to the Mayor, Councillor Alan Godson, and Council Leader, Councillor Colin Lambert.

The sign was left anonymously at Mr Williams’ party headquarters in 1992 and, busy campaigning for that year’s election, he resolved to sort the matter out later.

Mr Williams, now a councillor in Oxford, said: “I never did sort it out and for 20 years it languished in my garage. Three months ago, while back in the area to visit my parents, I drove past the Toad Lane Museum which was covered in scaffolding ready for 2012 and thought it was time to return the sign.

“It is the icon of icons to the Co-operative Movement and of great historic significance.”
The sign will now be going on display at the Toad Lane Museum when it reopens next year following an extensive refurbishment.

Councillor Lambert said: “With the 2012 International Year of Co-operatives almost upon us and Rochdale having recently been named as World Capital of Co-operatives, there could be no better time for the sign to come home.

“We have lots of exciting projects lined up to raise the profile of the borough and this is the perfect way to start. We are very grateful to Mr Williams for keeping the sign safe all these years and for coming back to return it in person.”