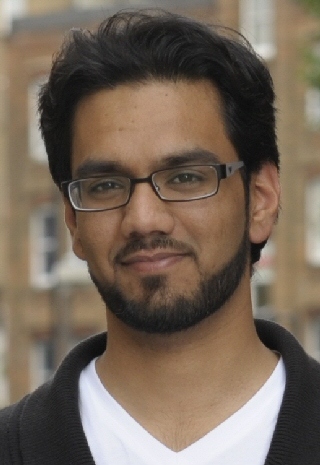 Representatives from seven different faith traditions came together in London earlier this month to share a low budget lunch and discuss the importance of interfaith work to fight extreme poverty.

22-year-old Usman Nawaz, from Rochdale, a Faiths Act Fellow of the Tony Blair Faith Foundation and one of the event organisers took part in this unique lunch alongside representatives from the Christian, Jewish, Hindu, Sikh, Buddhist and Bahá’í faiths. The lunch was in support of Live Below the Line, a charity challenge in May to fight extreme poverty and raise funds and awareness for charities including Malaria No More UK.

Guests discussed their perspectives on faith, food, poverty and malaria over the course of the lunch hosted at the National Bahá’í Centre. Usman shared his thoughts with fellow guests Chazzan Jeremy Burko from the clergy leadership team at the New North London Synagogue, Ravjeet Singh, Director of United Sikhs, Annabel Knight, from the Office of Public Affairs of the Bahá’ís of UK, Sheena Napier, of the London Buddhist Vihara, Kiran Bali MBE, a leading Hindu interfaith activist and Reverend. Dr Rosemarie Mallett of South London’s St. John the Evangelist church who has lived in Africa and suffered herself from malaria. There was significant common interest between the different faiths who were united by shared values of compassion, beliefs of caring for one’s neighbour locally and globally and a desire to work together for justice and peace.

Mr Nawaz explains his motivation for joining this multifaith initiative to tackle extreme poverty: “If my local mosque started a project raising awareness and funds for the fight against malaria, it could be successful; but it would more successful working with the church round the corner and synagogue down the road on the same issue. As people of faith working together on issues affecting all of us we can have a much greater impact when we show a united front, demonstrating that faith and people of faith can be a force for good.”

Their lunch was prepared on a tight budget of 70p per person as set by Live Below the Line. This charity campaign challenges the British public to get sponsored to live on £1 a day for all food and drink from 7-11 May 2012. This experience gives a glimpse into the lives of the world’s poorest 1.4 billion people who live on this budget every day for everything. The lunch menu comprised Special Vegetarian Couscous with spinach and spicy mixed beans served with sour cream and cucumber sauces, followed by Iced Buns and tea.

Lunch was cooked by Mr Nawaz and Charlotte Dando, a 27 year old Quaker from London.

They are two of 34 ‘Faiths Act Fellows’ leading multifaith action in the UK, USA, Canada, India and Sierra Leone as part of the Tony Blair Faith Foundation’s Faiths Act Programme. They are working at Malaria No More UK as part of the year-long Fellowship to unite people of different faiths in projects tackling global issues such as malaria, a preventable disease that claims the life of a child every minute.

The campaign has attracted the support of leading religious figures including Imam Irfan Chishti MBE, Chair of the Rochdale Multifaith Partnership. He said: “The Prophet of Islam, Muhammad (Peace and Blessings be upon him) encouraged a sense of global responsibility to all and hence we find the instruction, ‘One should not eat his fill whilst his neighbour goes hungry.’ Live Below the Line provides a platform for all of us to fulfil our global responsibility not only in thoughts and prayers but through practical action.”

Mr Nawaz and Ms Dando Lived Below the Line just a few weeks ago in preparation for their work to engage and unite faith communities around the country to take up the official challenge in May and raise funds for Malaria No More UK. Money raised will help save lives and stop suffering and deaths from malaria in Africa, where malaria is a lead cause of poverty, costing the African economy £8 billion a year.

Faiths Act Fellows at Malaria No More UK brought together members of seven faith traditions to talk about faith, food, poverty and malaria in support of the Live Below the Line campaign.