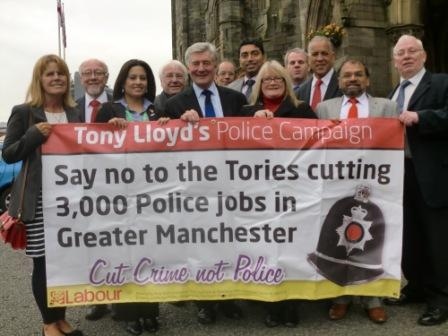 Labour’s candidate in the Greater Manchester Police and Crime Commissioner elections has launched his Rochdale campaign and vowed to fight cuts affecting the service.

Tony Lloyd, formerly the Member of Parliament for Manchester Central, has left his seat in the House of Commons in order to run in the election.

He was in Rochdale to meet local people and tell them about the new Police Commissioner role and his campaign and to hear their views about the police, crime and the wider justice system.

Mr Lloyd said: “Crime affects us all. We all want to be secure in our homes and our families to live in safe communities, secure in the knowledge that our home and streets are safe at night.

“The Tory/Lib Dem government is targeting our communities in Greater Manchester, cutting nearly 3,000 Police jobs - the largest cuts in the country.

“Senior police officers warn that the government is cutting the policing budget too far, too fast, taking risks with public safety.

“The Police and Crime Commissioner is an important new role but many people don't know that we're going to be voting for someone to run our Police in November.

“I've worked hard throughout my years in Parliament to represent the people of Greater Manchester. I know that the best way for me to represent the views of local people is to listen to their experiences and what matters to them.

“That's why I’ve visited Rochdale to talk to people about the new role and their priorities.”

Mr Lloyd was born and grew up in Stretford and went to local schools.

He was a Member of Parliament from 1983 and served as a Minister in the Foreign and Commonwealth Office, Chair of the Parliamentary Labour Party and Chair of the Trade Union Group of Labour MPs.

His campaign pledges are as follows.