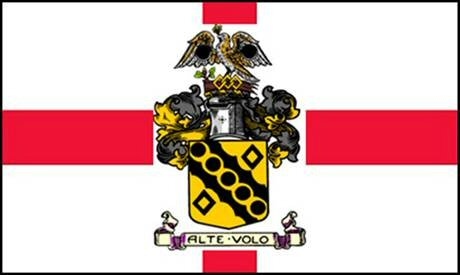 Heywood's flag could be altered to include the St George’s Cross.

The move is being considered following a report encouraging civic leaders to embrace the national flag.

Members of the public are now being asked for their views on the design, which can be seen above.

Heywood Township Chairman said: “England is multi-cultural, diverse and inclusive and our nation’s flag is symbolic of this – and of which we are extremely proud.”

The suggestions follow a report known as The Sceptred Isle, which accused civic leaders and politicians of failing to safeguard the St George’s Cross.

It was written by British Future – an independent think tank on migration Heywood’s flag currently features the town’s coat of arms and motto Alte Volo, meaning ‘I Fly High’.

Any comments should be submitted to Stuart Hay at Heywood Township office by emailing stuart.hay@rochdale.gov.uk, by phoning 01706 922230, by posting them to The Township Office, The Phoenix Centre, Church Street, Heywood OL10 1LR or by dropping them off in person at the Phoenix Centre reception.

The consultation period runs until the next meeting of Heywood Township committee on 7 January when a final decision will be made.