You are Here: Home » News » News Headlines » Arrests made at illegal tyre sites in the North West

Arrests made at illegal tyre sites in the North West 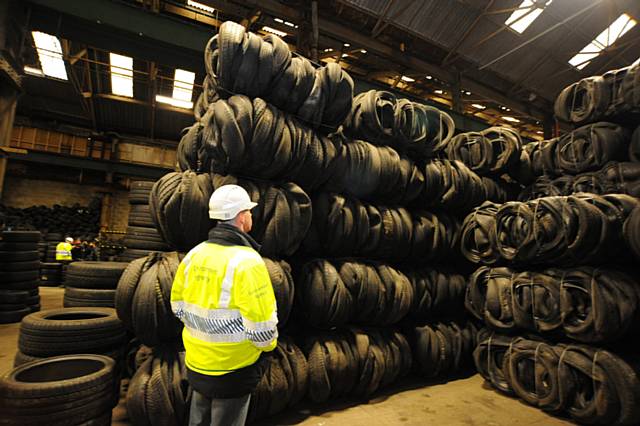 Five arrests were made yesterday as part of an Environment Agency investigation into alleged waste crimes.

Action is being taken to protect the livelihoods of legitimate business owners and to safeguard surrounding communities. Illegally hoarded used tyres pose a serious fire risk and a blaze would produce toxic fumes and air pollution triggering an evacuation. The Environment Agency is working with the Lancashire Fire Service and Greater Manchester Fire Service to ensure steps are taken to make the sites safe.

Operation Broadway, which has been running for seven months, is one of the National Environmental Crime Team’s major ongoing investigations. Other cases include those involving exports of illegal waste, organised criminal networks, or industrial scale fly-tipping.

Mat Crocker, Environment Agency Head of Illegals and Waste, said: “The Environment Agency will protect the legitimate recycling industry by being robust in tracking down waste criminals and bringing them to justice. As well as undercutting small businesses, waste crime risks damaging public health and the environment.”

Louis Hunt, Environment Agency Senior Investigating Officer, said: “This raid has been a success; this progress in Operation Broadway has only been possible with vital support from the police and fire services and intelligence shared through ‘Project Genga’. This is an ongoing investigation and we would urge anyone with suspicions or knowledge of illegal waste activities to contact the Environment Agency on 0800 807060 or Crimestoppers on 0800 555111.”

Lancashire Fire and Rescue Service’s Station Manager Jim Fowler said: “The steps taken this morning were necessary to keep the area around the site in Blackburn safe. The illegal activities that have been carried out on the premises put the local community at risk. Fire Safety Enforcement Officers are investigating the site to establish whether there have been any breaches of the Fire Safety Order and actions will be taken against the owners if they are required.”

Waste crime deals a lethal blow to legitimate small businesses and risks major pollution incidents. Tyres can and should be recycled and made into useful new products. Legitimate businesses in the region have found their businesses scuppered by an illegal rogue trader who seemed to be undercutting their prices.