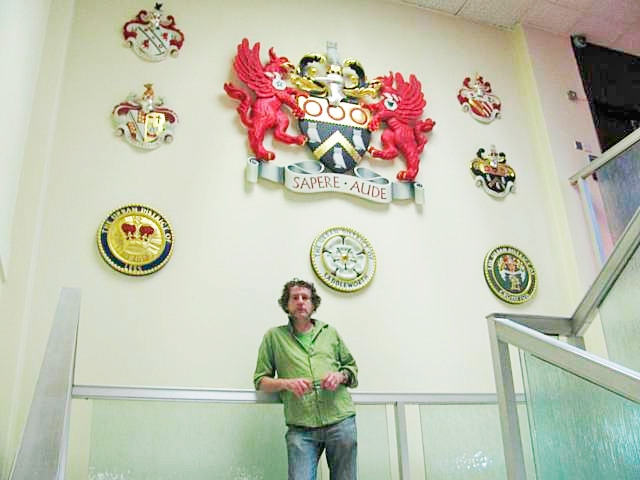 Rochdale born Charlie Oldham was delighted to be asked by Oldham Borough Council to carve a full set of their district Coats of Arms.

Eight Coats of Arms were commissioned in total for a display in the Oldham Civic Centre at the entrance to the Council Chamber. The centre piece is a six foot diameter wood carving of the coat of arms that was created for the borough in 1974 when Oldham joined with Chadderton, Shaw, Royton, Lees, Failsworth and Saddleworth to become one authority.

This large borough Coat of Arms has a shield featuring three white owls, a pun on "Owldham". The motto "Sapere Aude" means "dare to be wise" with the word "Aude" itself also deliberately similar phonetically to the "Owd" of the local pronunciation of "Owdham" or "Owldham."

Charlie Oldham's work was of a sufficiently high standard for him to be accepted as a member of the prestigious Society of Heraldic Artists.

Though he now works from his workshop in Somerset, Charlie still has family in the area.