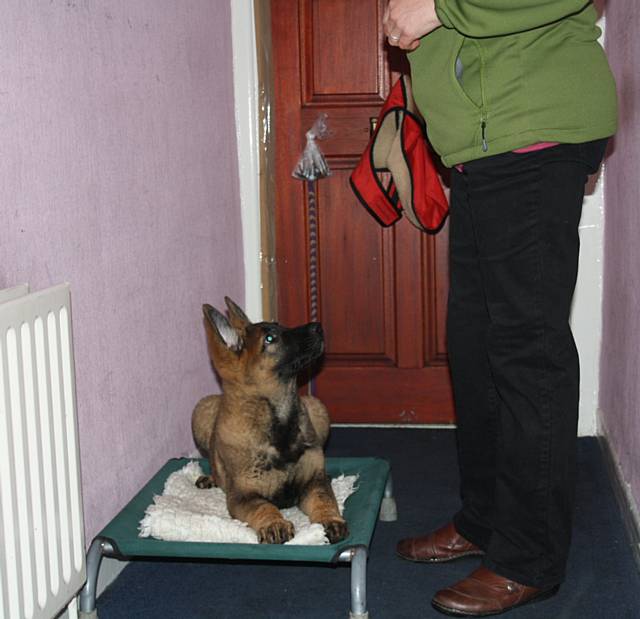 Kato on his camp bed by the front door

Two weeks on and Kato is now 11 weeks old. He is learning something new every day and because he is now very confident it is a good time to introduce him to lots of people and novel situations.

Yesterday he went to an obedience competition and saw lots of calm, friendly adult dogs going about their business. He also met many people who made a fuss of him and played with him.

At home we are working on calm behaviour particularly when visitors come to the door or when he is being handled and groomed. I have introduced Kato to a small camp bed that is light and can be carried into any room where I want him to settle. Whenever I gesture towards the bed Kato immediately gets on the bed and lies down waiting for his treat.

He has learnt to stay on the bed whilst I knock on the door and shout “come in”. He can also remain on the bed whilst the door is opened and someone quietly walks in and goes through to the kitchen. There is always a bag of treats hanging on the back of the door so that I can train this behaviour whenever someone knocks on the door.

Grooming and handling can often get puppies excited so that they want to mouth and bite hands and brushes. For this exercise Kato has been taught to stand with his two front feet on a raised surface such as a step or a stool. When he could stand still for at least 15 seconds I introduced standing still and focussing on a treat whilst be brushed. I would do only one or two long gentle strokes of the brush till he got used to the feel of the brush and waiting for his treat. Any movement especially trying to mouth then the brush and treats are taken away as I stand back and quietly tell him “no”.

Eventually puppies realise that they must remain still to get the treat and this then allows you to look into puppy’s ears, check his teeth, pick up his paws and generally feel him all over.

There are times during the day when puppies appear to have a burst of energy. It is usually early evening when they seem to have the most energy and this will be when biting is most problematic. Interactive toys can be a great help in allowing the puppy to use up his energy without resorting to inappropriate biting games. Puppies bite just about anything they come across and most of the biting they do is investigative, however, I always interrupt biting that hurts with a startle sound which causes the puppy to stop for a second. This is a good point to calmly leave the room for a t least 10 minutes so that the puppy can see that its biting caused the interaction to stop. It also allows the puppy’s adrenaline levels to drop so that it becomes calm and can learn. When I re-enter the room I provide the puppy with something else to do.

Calm games allow the puppy to learn as it plays. There are many puzzle games on the market which are ideal for this stage in the puppy’s development.

This week I have started the name recognition training. Up until now I have not used his name – referring to him as “puppy”. Every time I say his name I want him to respond by either coming to me or giving attention immediately. All too often owners continually call the puppy’s name so that the puppy learns to ignore the sound as it has no meaning for the puppy.

I start this exercise by having the puppy off lead in a safe, enclosed area. Whilst the puppy is wandering around I call his name, “Kato”, in a loud exciting tone and at the same time move away from the puppy with my hand held low at his eye level exposing a very tasty treat. Naturally the puppy trots to the outstretched hand to eat the treat. After only two/three repetitions the puppy responds immediately to the sound of its name.

In addition to the puppy responding to his name, I also want the puppy to respond to a whistle by racing as fast as he can back to me. This is the emergency recall designed to get the dog back to you where it is safe as quickly as possible. I use a whistle in these circumstances because dogs tend to be naturally very responsive to high pitched sounds such as whistles. Also the whistle can be heard over long distances and above background noises. It always sounds the same and different members of the family can use the same whistle.

To introduce the whistle I want the puppy to associate it with something very powerful and rewarding. For most dogs meal times are extremely important events and the more hungry the puppy is the more important the mealtime is. Armed with a hungry puppy, a gundog whistle and a strong visual cue such as the puppy’s food bowl, the puppy is taken to a large but safe training area.

The thrill of running and then getting some raw minced beef in his bowl is Kato’s best game ever. He still wears a harness with training line attached so that he never learns he can ignore the whistle and he grows up believing that I am always in control no matter what distance he is away from me. With careful training and gradually introducing distractions this will become a very reliable fast recall.