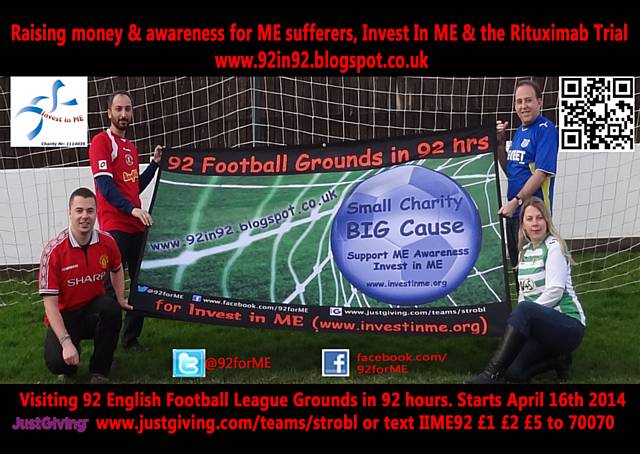 92 English football grounds in 92 hours for ME

Mike Harley is leading a small team to visit all 92 English football league grounds in 92 travelling hours in support of Invest In ME (www.investinme.org) - a leading M.E. research charity in April this year.

Mike said: "We will be visiting Rochdale on Monday 20 April.

"Our aim is to raise awareness for M.E. which we feel is an illness which doesn't get the funding/research as many others so it would be great to reach as many people as possible.

"My childhood friend Ian has suffered with the illness for over 7 years and a new research trial that could help him and up to 250,000 other UK sufferers get back to living normal lives.

"We are already due to appear on ITV News, BBC Radio and Talksport and are hoping to raise the profile as much as possible."

Over 40 clubs across all four divisions (including Manchester Utd, Chelsea, Arsenal, Tottenham and more) have offered matchday programme features, signed kit and even meets at the stadiums with the players.

Find out more about the event at www.92in92.blogspot.co.uk and www.justgiving.com/teams/strobl or you can email Mike at kid_a18@hotmail.com