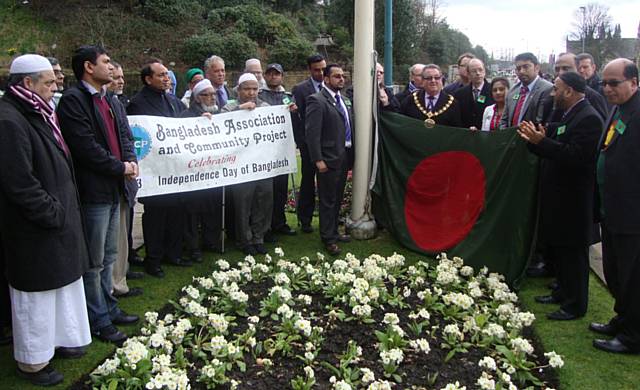 The 43rd independence day of Bangladesh was marked at a gathering at Rochdale town hall yesterday (Wednesday 26 March 2014).

The Bangladesh flag was raised by the Mayor Peter Rush outside the Town Hall in the presence of of the Bangladeshi community, councillors, guests and friends. This was followed by a gathering in the Town Hall Exchange and the Mayor’s parlour.

Keith Swift (RBPP – Chairperson) welcomed everyone to the gathering on behalf of the Rochdale Bangladeshi Partnership Project (RBPP).

Mohammed Dobir Miah who gave a brief history of the Bangladesh Independence and of the British Bangladeshi community in Rochdale.

Dr Musharraf Hussain (RBPP - Vice Chair) talked about his recollection of the liberation and how we should all unite in peace.

Rochdale Borough Council Leader, Colin Lambert said: “We’ve introduced our new official policy on flag raisings, to help us celebrate our rich and diverse community. Bangladesh Independence Day was the third day in recent weeks to be marked by a flag-raising ceremony. It follows St Patrick’s Day and Pakistan Day, St George’s Day will be celebrated on 23 April. It is important for us to mark events and anniversaries like these which are close to our residents’ hearts.”

Councillor Farooq Ahmed (who is one of two councillors of Bangladeshi heritage and an advisor to RBPP) thanked everyone for attending and talked about his experience of Bangladesh and the good work of the partnership.

Councillor Andy Kelly, who is working with RBPP on the ‘Sylhet to Rochdale; a young people’s Bangladeshi heritage project’, briefly talked about the initiative and asked for volunteers to come forward.

Mohammed Dobir Miah (RBPP Co-ordinator) said: “I pay homage to all the departed souls who have sacrificed their lives for the freedom of our beloved motherland that we know today as Bangladesh – may they rest in peace. On the occasion of the 43rd Independence Day, I wish all Bangladeshi’s in Rochdale and around the world the very best wishes on behalf of RBPP and BACP.

"I hope that our heritage project will help the next generation to learn and understand about their identity and roots. I’m really pleased that the local authority has put in place a policy to mark these occasions and I am equally delighted that we are attracting a diverse audience and I welcome everyone including members of the indigenous community.”

Muhibur Rahman (Chairman of BACP), thanked everyone for attending the flag raising and gathering. He also expressed his appreciation on behalf of the Bangladeshi community for the support provided by Rochdale Borough Council and talked about the great diversity in our borough.