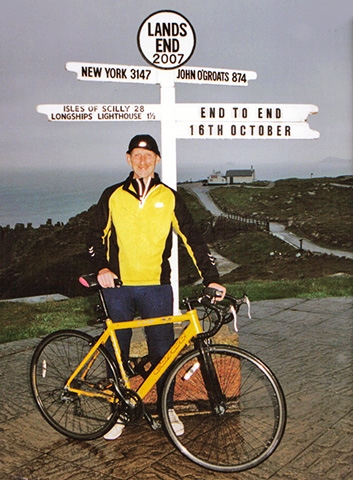 Henry Krasowski  will be cycling from Rochdale to Lands End and up to John O’Groats before heading back to Rochdale to raise money for Cancer Research and Springhill Hospice.

Henry will be starting the ride on Saturday 14 June with the aim of completing the challenge in 10 days.

Andrew McMullen, Henry’s brother-in-law, who will be accompanying him on the trip as a backup driver and for support, said: “He doesn’t drive so rides his bike everywhere. Seven years ago he did John O’Groats to Lands End and promised his daughter he would do the ride again one day.”

At the end of 2012, Henry lost his daughter to cancer at the age of 30. Before she died he promised her that he would complete another charity bike ride. His daughter only found out she had cancer when she went to hospital with problems during pregnancy. Her daughter was one when she died.

“He has done a similar ride to this before but this time he is starting from Rochdale so he has pretty much doubled the length this time around,” said Andrew.

Henry hasn’t set a fund-raising total for the trip. Andrew added: “I think he just wants to get as much as he can for the charities.”

It is estimated that 60-year-old Henry will cycle over 1,850 miles by the end of his trip.

Anyone wishing to sponsor Henry can do so by visiting: