You are Here: Home » News » News Headlines » Tour de France weekend described as the 'best weekend Littleborough has seen in a long time' 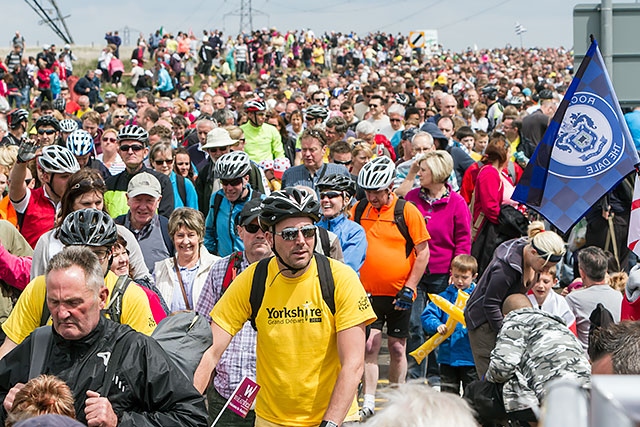 Over 10,000 people enjoyed the Tour de France at Blackstone Edge

Over 10,000 people made it to Blackstone Edge to see the sporting spectacle pass through with a further 3,000 people watching the event on a big screen in Hare Hill Park. Around 3,000 people watched the Tour de France on a big screen in Hare Hill Park
Note: This photo was taken at the end of the day after many had left

Chairman of LEAF (Littleborough Events and Association Forum), Steve Lister said: “It was absolutely brilliant. It really did exceed our hopes and expectations. I think it is one of the best weekends Littleborough has seen in a long time. It was brilliant.

"The council were great and we had a lot of backing from them with the things we did and now we are looking at doing some of the things as their own individual events.”

Local businesses in the area enjoyed the benefits of being open during a busy day yesterday (Sunday 6 July).

Bob Wells from The Square café bar, on Church Street, said: “We sold a lot more takeaways than we usually do. I think people were just trying to get to the top as quickly as they could. We were busy but I would describe it as a usual busy Sunday. It was a good day.”

Rebecca Chadwick, from Rebecca’s Coffee Shop on Hare Hill Road, said: “The shopping streets in Littleborough were quiet until about 11am and then it seemed to get busy. We had people in our shop until about 5pm yesterday. We were busier than we usually are and I would definitely open again for something like that.”

Matthew Shaw, from The Wheatsheaf pub on Church Street, said: “We were open from 9am and we were busy all day. We were five times busier than we usually are on a Sunday. It was great. We would have been open anyway because we are a pub but we were definitely busier than usual.”

Natalie Marney, from The White House pub, said: “We normally do well on a Sunday but with extra staff costs and things I will be happy if we break even. Based on the publicity and the atmosphere I am glad we opened but I won’t be doing it again. It was very hard and when you haven’t done something like that before you have no idea what to expect. The atmosphere was brilliant though and there were a lot of people around. There were no incidents so that was good and it makes you proud to be British.” Kelly Turner Mitchell, who owns 25 Ten Boutique, was not as fortunate at attracting passing trade on the day. She said: “It was disastrous for us. We didn’t take a single penny. We don’t usually open on a Sunday and we were approached by the council based on the fact that so many people would be here but it didn’t work for us I’m afraid. I think some of the other businesses who opened closed early but we stayed open until 4pm but I won’t be doing it again. Obviously I agreed to open and you have to take those chances but it didn’t do anything for us.”

Local residents are pleased with how the weekend went with many of them stating that they are “proud to be from Littleborough”.

One resident said: “Well what can I say... I love living in Littleborough had a brilliant weekend. Bands in the park Friday, boat race at Hollingworth Lake Saturday and the nearly killing us walk up to see Tour de France... brilliant.”

Rochdale Online photographer Charlotte Wellens went the extra mile to capture the crowds in Hare Hill Park and was suspended from a climbing wall to take some extra special photos. Steve Lister said: “I must recognise the courage of the young lady from Rochdale Online who took the photos. We suspended her from the mobile high ropes. She went that bit extra for the cause. Congratulations Charlotte on a great job.”

Gary Green, Contracts Team Leader for Operational Services at Rochdale Council, captured the moment Charlotte was hoisted above the ground and said: “I have to pass on my sincere thanks to Charlotte for being game enough to be hoisted high above the ground in order to get the shot.” John's artistic mementos of the once in a lifetime opportunity can be bought via the Rochdale Online Department Store: