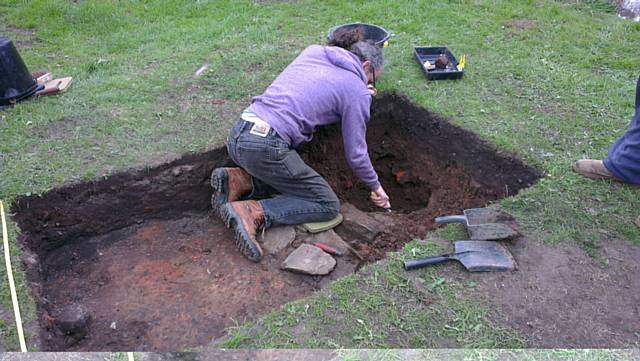 Middleton’s very own Time Team, Middleton Archaeological Society, undertook an archaeological investigation of Clarke Brow/St Leonard’s Square over the weekend of 13 and 14 September. The dig was run to coincide with the English Heritage Open Days.

The excavation area is just to the north of St Leonard’s Middleton Parish Church. Previous excavations have revealed evidence of a timber framed building known as the Grapes Inn and the late Georgian building which replaced it.

This dig was limited to three trenches. A small section of stone wall was found which is believed, based on its location, to have supported the early timber frame building and which was subsequently adapted to support the eastern wall of the Georgian Ale House and farmhouse. A small area of floor surface was also exposed. This floor seems to be part of the porch attached to the east wall of the building. Unfortunately, time beat the team and they were unable to excavate the interior of the building.

A part of the eastern property boundary was excavated to expose the 19th Century ground surface which at the time sloped very steeply down to the east. This slope was reduced considerably by importing large quantities of sand during landscaping in the early part of the 20th Century.

The society also had a display open to the public in the Baptistery of St Leonard’s displaying information about the society’s recent investigations.

Lee Wolf, chairman of the society, said: “This was our fourth dig at Clarke Brow and we plan to revisit the site again next summer to carry out a larger scale investigation. This larger excavation should reveal much more of the eastern portion of the site and its overall foot print.”

Middleton Archaeological Society was formed in 2011, along with the practical archaeological investigations they also host monthly talks at the Olde Boar’s Head on the last Thursday of each month.