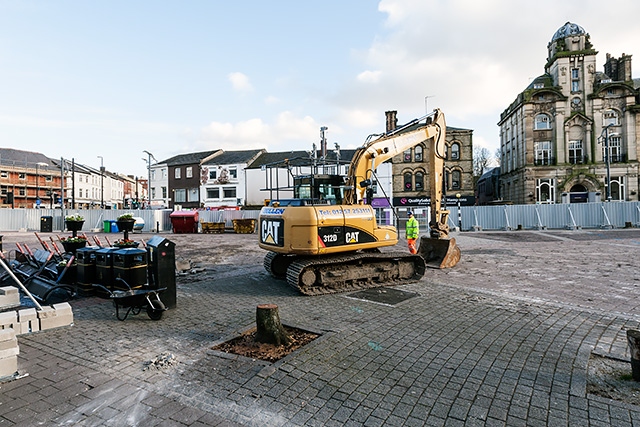 Work has started on uncovering the River Roch in Rochdale town centre. Having cleared the site and erected hoardings, the contractor, VBA Ltd, will cut through just over half a metre of concrete to remove the culvert, which acts like a roof for the river. It is hoped the river bed and three-metre high walls will be exposed by June, depending on river levels. Council Leader Richard Farnell, said: “Rochdale town centre is changing fast and it’s great to see another important project getting under way. We already have a beautiful historic attraction in our Grade 1 Listed Town Hall, and revealing our medieval bridge will be a further boost to our wonderful heritage offer. This will create a visitor attraction in the town and help make Rochdale a much more attractive place for the people who live and work here.” Stage two of the work, which will start in the summer, will see extensive work on the bridge itself, with the erection of new parapets in traditional York stone, surface repaving and improvements to the stonework.

The final stage of work, to uncover the section of the river on the other side of the bridge in front of Barclays Bank, will then begin. Residents and visitors will be given a unique prospective on the scheme throughout the works, with viewing windows set to be placed along the section of hoardings running from the bottom of Yorkshire Street up to The Walk. The opening of the river has not been without controversy with critics questioning the cost and the benefit to the town.

In May 2012 Rochdale Borough Council’s then head of Head of Planning and Regulation, Peter Rowlinson, described the re-opening as a “wonderful project” which is “deliverable”.

Paul Ambrose, then Senior Planning Officer of Rochdale Council, added: “This ambitious project would reveal the medieval bridge and restore the centre of Old Rochdale as a focal point and unifying feature between all parts of the town centre.”