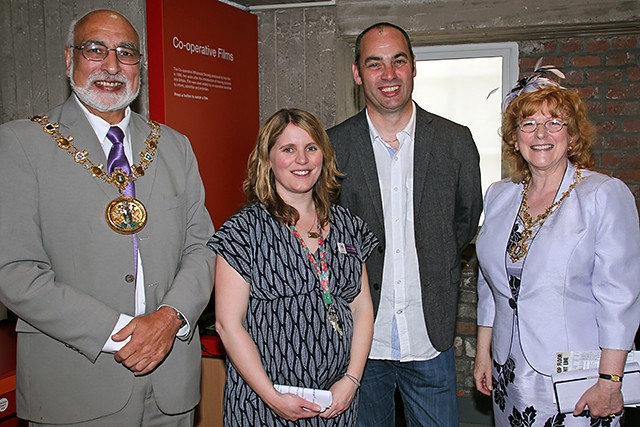 A new WW1 exhibition was officially launched at the Pioneer's Museum today (Saturday 27 June) by Mayor of Rochdale Surinder Biant and Mayoress Cecile Biant; the ‘From Shop Floor to Font Line’ exhibition explores the impact of war on co-operative members and employees.

Speaking to Rochdale Online, Museum Manager, Jenny Mabbott said: “We are really pleased with the exhibition and are really happy with how the launch has gone.

“Previously the space was quite restricted but now it looks great with the cabinets and things we have added. We have a lot of interactive elements as part of the exhibition so there is something for everyone.”

Mayor Surinder Biant said: “People don’t realise the impact that the co-operative movement has had all over the world, so it is something people should keep up their support for. It is important for Rochdale.”

The exhibition tells the stories of co-operators who signed up to fight and those who refused to take up arms for reasons of conscience. It also reveals how the co-operative movement contributed to the war effort and how women’s roles in co-operative stores changed.

The exhibition also addresses the difficult moral decisions faced by co-operators, as they had to decide what came first, co-operation or country.

Visitors can discover why co-operator William Ewart Boulter was awarded the Victoria Cross and listen to testimony from George Dutch, a co-operator and conscientious objector who was tortured and humiliated for his beliefs.

The exhibition also shows how the co-operative movement’s factories, supply chains and premises were utilised to meet the nation’s needs. It illustrates the impact on troop morale of cigarettes, chocolate and Christmas puddings sent to the front by co-operative societies.

Testimony from appeals for the exemption of male branch managers also reveals interesting perspectives on the perceived capabilities of the female staff who stepped in to cover roles of conscripted men.

The museum decided to launch the exhibition after receiving a grant from the Heritage Lottery Fund.

Jenny added: “2014-2019 is all about marking the centenary of World War 1 so we decided to apply for the grant to allow us to do something and we are really pleased with what we have.”

The exhibition will be in the museum until May 2016.