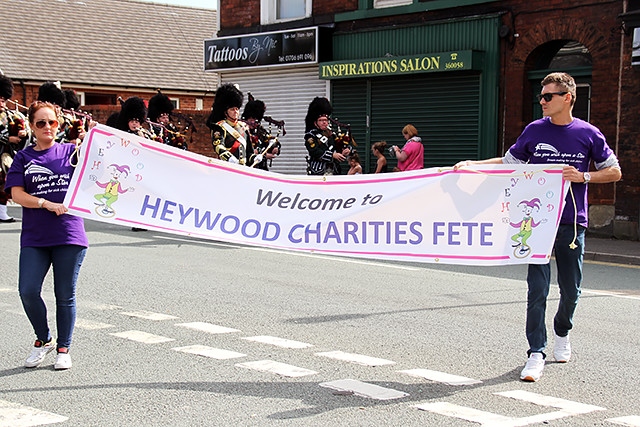 This year’s Heywood Charities Fete has been described as “the biggest yet” by organisers.

George Kinder, from The Rotary Club of Heywood, said: “The parade has been the biggest we have ever had and even in the park, we have had more things going on than before. The town has really got behind us this year and it has been a huge success.”

Starting on Sefton Street at 1pm, the huge parade saw a number of local organisations bring the theme of nursery rhymes to life as they made their way to Queens Park.

Once in the park, charities lined the paths including Marie Curie Cancer Care, Super Josh and Rochdale Lions.

There were also performances on the stage, fairground rides, carnival games and activities.

The Charities Fete Committee comprises of individuals from Heywood and members of groups in Heywood including, Rotary, Lions, Scouts, Guides and the Business Group.

Money raised at the fete is then distributed between a number of charities throughout the upcoming year.