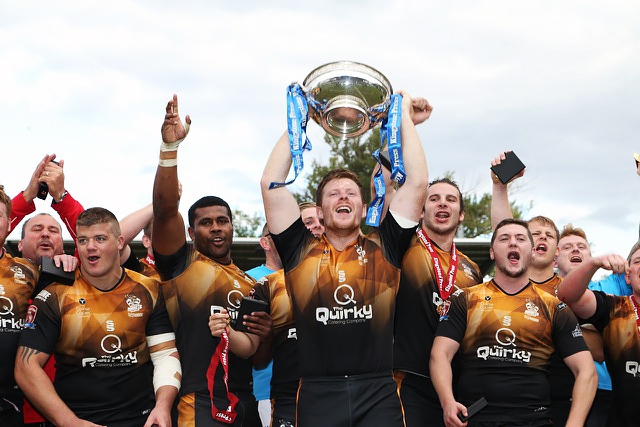 Rochdale Hornets celebrate a magnificent victory over Toulouse Olympique in the League One Promotion Final at Stade Ernest-Argelés in Blagnac, France

Rochdale Hornets did themselves and the town proud as they came from behind in remarkable style to win the League One Promotion Final against Toulouse Olympique at Stade Ernest-Argelés in Blagnac, France.

With under 20 minutes gone Hornets, playing in their amber and black kits, were behind 16 points to nil and went in at half time time still 16-8 down, but a superb second half comeback saw Hornets take the lead with ten minutes to play. Toulouse set up a nail-biting last minute with a converted try to come within two points, but Hornets prevailed to secure a stunning victory in the favourites' own back yard.

The opening ten minutes saw both teams have good spells before Toulouse opened the scoring with Bastien Canet diving over the line. Converted by Mark Kheirallah.

Toulouse increased their lead when good hands led to a try for Rhys Curran. Kheirallah adding the extras.

Hornets kept their composure and were playing well under pressure but Toulouse scored again as Curran walked through a gap - created after Chris Riley went down with a shoulder injury - and fed Gregory White to cross the line. The conversion attempt missed but with just 19 minutes on the clock Hornets were staring down the barrel of a 16-0 deficit.

However, Hornets made it clear they were not going to lie down and hit back quickly opening their account with a great try from Jack Holmes after good work from Michael Ratu. Paul Crook converted.

With Chris Riley, Jono Smith and Michael Ratu all carrying knocks, Hornets suffered a big blow when David Cookson was injured and unable to return to the field.

With half time fast approaching, Toulouse gifted Hornets a penalty for a high tackle on James Tilley - which Crook converted.

The travelling Hornets supporters emotions went from ecstasy to despair when Hornets scored early in the second half only for the try to be chalked off due to the French touch judge calling a forward pass.

The game was beginning to get tasty, with Toulouse in particular guilty of some seriously dubious 'spear' tackles, causing the referee to speak to both captains.

Ten minutes into the second half and Hornets started to claw back the deficit; Lewis Galbraith touching down out wide after Hornets pressure. Crook added the extras with a superb kick from touch to bring Hornets back to within two points of their French opponents.

With fifteen minutes to go Hornets were pressing hard but still two behind and Toulouse were again resorting to illegal spear tackles.

Into the final ten and Hornets took the lead when a great cross kick resulted in a try in the corner for David Cookson. Crook failed to convert but Hornets had a two point lead.

Hornets stepped up the pressure again and minutes later increased their lead to eight points - Chris Riley with the try. Crook converted to equal the all time Hornets point scoring record.

With under five minutes to play it appeared game over but with just over a minute left on the clock Toulouse scored out wide through Bastien Ader. Kheirallah's kick was good leaving the game on a knife edge at Toulouse 22 - 24 Hornets.

A nail-biting last minute for the Hornets supporters but the French side couldn't muster a final attack and Hornets prevailed to score a quite remarkable victory and seal promotion to the Championship.