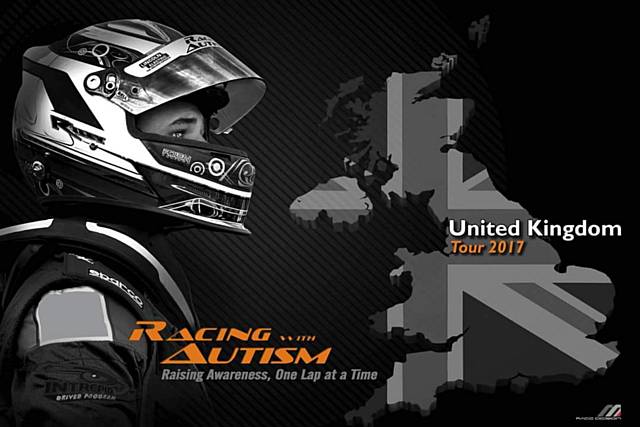 Canadian kart champion Austin Riley paid a visit to Team Karting in Castleton as part of his UK 'Racing with Autism' awareness tour.

The event was for local schools, and selected pupils were invited to try their hand at karting.

Matty Street, Team Karting track manager, said: "A few months ago we noticed a pattern that people with autism are really good at karting. At one point six out of the top 10 juniors on our lap record board had autism.

"We also work closely with young talented racer Sandro Ballesteros. We've sponsored his outdoor racing and he has a training session every Saturday morning with myself.

"I got talking to Tony, Sandros' dad, about Sandros' autism and how he has developed and matured so much over the year that I'd known him. We then got talking about the Racing with Autism team in Canada which coming to the UK on tour.

"I contacted to Racing With Autism about them visiting our track. They thought this was amazing and were on board without hesitation.

"On the day we had five schools and over 40 kids attending. All having two karting sessions each. Race coaching from the RWA team and an our presentation from RWA. We also provided lunch for everyone too.

"The presentation itself was amazing I can't thank the RWA guys enough. I saw smiles on kids faces and tears in the eyes of parents and staff.

"The day was a huge success, and we introduced lots of people from the local community to the world of karting who normally would not get the opportunity, or feared to try due to a lack of confidence."

The Racing with Autism team (which includes Austin's father Jason, and cousin Shane Riley) also visited St Luke's Primary School in Heywood and gave an inspiring autism awareness presentation. They were introduced to a packed assembly by nine-year-old Sandro Ballesteros.

While they were in the area they also entered a Racing with Autism team, which included Sandro, in a two and a half hour endurance karting event, finishing second overall.