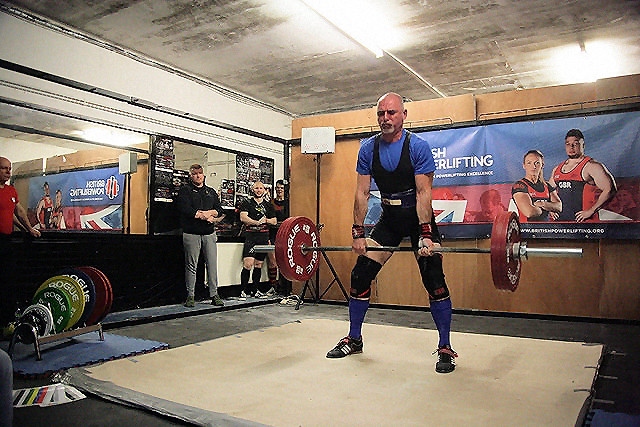 Dr David Penney during a deadlift

A local powerlifter has qualified for the British Championships after making his formal debut as a competitive powerlifter competition in Liverpool last weekend – just 10 weeks before his 50th birthday.

Dr David Penney, a scientist from Castleton, lifted 135kg in the squat, 95kg in the bench press and 175kg (more than twice his bodyweight) in the deadlift, giving him a total of 405kg, which was 10kg over the total required to qualify for the British Championships Masters 2 age group in his bodyweight class (-83kg).

Father-of-three David, who trains at Full Contact Performance Centre, said: “Taking part in the competition was exhilarating and represented a significant milestone in my powerlifting journey and was what the previous six months of hard training and nutritional discipline had been about.

“My game plan all along had been to hit a qualifying total for the British Championships and I exceeded this by 10kg, so I'm very happy with the result. I am now taking it easy for a week and will then start training for the next comp at the end of April.”

He added: “The popularity of powerlifting is growing rapidly in the UK and is a great way to get and stay fit even in your mid to later years.”

Just a couple of years ago, David had an expanding 46-inch waistline and had never entertained the idea of joining a gym. Just seven months after stepping through the doors of Full Contact Performance Centre, he had dropped to a 34-inch waist and lost around one third of his bodyweight. After transforming his figure, he put pen to paper and wrote a book entitled ‘Escape the Fat Trap.’