You are Here: Home » News » Sport News » Rochdale Harriers to run 28 half marathons in all 28 EU countries 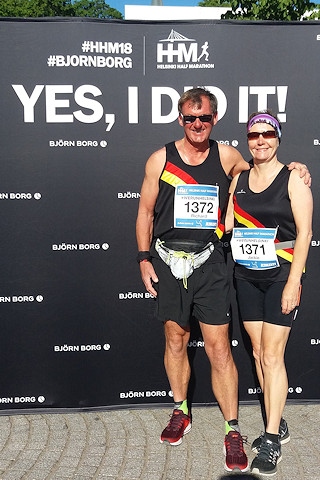 Richard and Jackie Mason at the Helsinki Half Marathon

Two inspirational members of Rochdale Harriers have set a challenge to run 28 half marathons in all 28 European Union countries for charity.

The couple started the challenge with the Rochdale half marathon on 8 October 2017 and have run more than 130 miles to date across England, Ireland, Malta, France, Poland, Germany, Latvia, Finland, and Lithuania, where they took on their first marathon, and even cycled between London and Paris. All trips are being funded by Richard and Jackie, who are avoiding races in July and August due to the hot weather.

Richard said: “Initially this is my challenge, but Jackie will attempt as many as she wants and stand in for me if I get injured.

“The whole cost of the challenge will be met by ourselves, and as an extra incentive, I will donate £10 for every run I fail to complete in under two hours and Jackie under two hours and 15 minutes. We will also donate £50 for any country not completed before April. So far, we have had to donate £60.00 between us, so on the whole we are hitting our target times.”

Entries are so far lined up for a further 10 half marathons in Hungary, Denmark, Estonia, Sweden, Luxembourg, Slovakia, Bulgaria, Slovenia, Spain and Greece.

Richard and Jackie have yet to enter races in the remaining EU member states before their self-imposed deadline of 1 April 2019: Austria, Belgium, Croatia, Republic of Cyprus, the Czech Republic, Italy, the Netherlands, Portugal and Romania.

Richard continued: “In September and October, we really get going and have entered four races in September and three in October. This should give us a fighting chance of completing all 28 in the time limit, but it won’t be easy.

“Rochdale is definitely our favourite; it starts right outside the amazing Town Hall, takes in the Industrial history of the canal before arriving at Hollingworth Lake for a lap round the lake. Great organization and atmosphere, and you can’t beat running in your home town when the roads are closed and you can walk from home to the start.

“After Rochdale our favourites are between three: Berlin, as the course ran past so many landmarks including Check Point Charlie, Brandenburg Gate and the Reichstag, Clonakilty near Cork Ireland, the scenery was stunning and people so friendly, but it goes to Riga in Latvia. We had superb weather, all the flowers were out and we really enjoyed visiting the city for the first time .

“We are now really looking forward to the Lanzarote Half Marathon on 8 December. We are going for a week to Puerto del Carmen so hoping for some winter sun and a chance to relax. We are visiting many of these countries for the first time and we are also looking forward to visiting Budapest and also Romania, though we are struggling to find a suitable race at the moment.”