You are Here: Home » News » Sport News » Rallying: Brown back on top in Belgium

Rallying: Brown back on top in Belgium 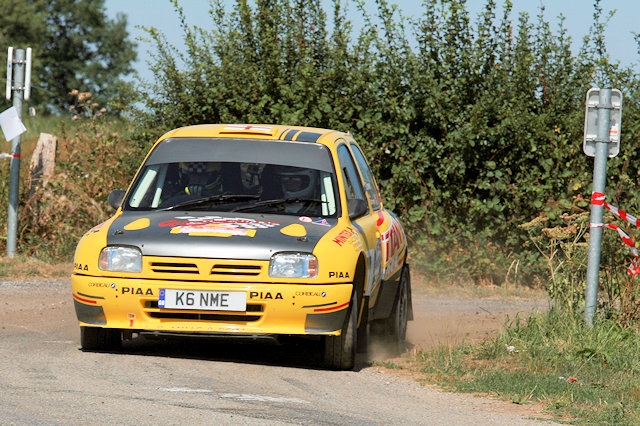 Steve Brown enjoyed a successful return to the Flanders International Rally Challenge (FIRC) last weekend by taking his unique Nissan Micra Kit Car to a class win and third in the FIRC two-wheel-drive category at the Les Boucles Chevrotines in Belgium.

The Rochdale driver overcame searing heat both in and out of the car to bring his Nissan home in 17th overall, despite being the first fully competitive outing for the machine after a 12-month break which saw the Micra undergo a significant overhaul.

Guided by Paul Stringer in the co-drivers seat, their result on the South West Belgium roads marks a return to form for the car after dominating the FIRC class 3F in 2016 prior to its rebuild.

Sporadic outings during the opening half of the season have not helped Brown’s championship aspirations but with the Nissan not available due to ongoing works, he had set a target to return the car to compete in the summer.

A run on the Rallye Festival Transmiera in Spain in April was bolstered by June’s Rallye Van Wervick in Belgium which highlighted some additional changes required to attempt to bridge the power deficit in the class. Browns Nissan carries a lowly 1300cc engine with his rivals powering away in 1600cc variants so a trip to Tommy Field Race engines in the downtime offered the opportunity to address the balance for the weekend ahead.

Despite being only one other contender in the event category, Brown had to work hard over the 12 stages to stay ahead of the more powerful machine. Opting to focus on ensuring the Nissan was back to it’s best, he elected to drive his own rally and after the opening loop of stages on Sunday morning, was soon back in the groove.

As the stages passed, the heat began to intensify and the ambient temperatures would head towards 30 degrees, but inside the Micra it was much hotter due to the exhaust being in close proximity to the chassis meaning as well as having to battle with the stages, Brown also needed to find the additional stamina to complete the event. With over 115km of special tests to contend with and no single stage shorter than 9km, a long day behind the wheel was be the result.

Brown kept his cool as much as possible to cross the finish ramp on Sunday evening with a class win and a confidence that the Micra’s developments have been a success.

He said: “It’s been a long time coming but its great to be back in the Micra when it's performing as well as this and to take the class win in the process is the icing on the cake this weekend.

“It’s a shame there wasn’t more competition but we were really focusing on making sure the changes we made to the car since our last outing had worked and I'm pleased to say that they certainly have.

"Everything feels really good with the car but the searing heat was something else today. It was like a sauna in there and being such a long day and long stages really tested my physical strength today.”

Brown also scored valuable FIRC points for his campaign which has seen him miss a handful of events at the start of the season.

He added: “It would have been nice to really focus on the FIRC class 3F title this year but that just wasn’t possible. That said, we will still continue to rack up the points whilst we can and having the Nissan back to do that is fantastic. We are certainly looking forward to the next one and see what we can do when both the car and I am back on form.”

His next outing will see a shift to the historic specification Questmead – Mintex  Mini Cooper for the Tour of Flanders Rally at the end of the month back in Belgium.