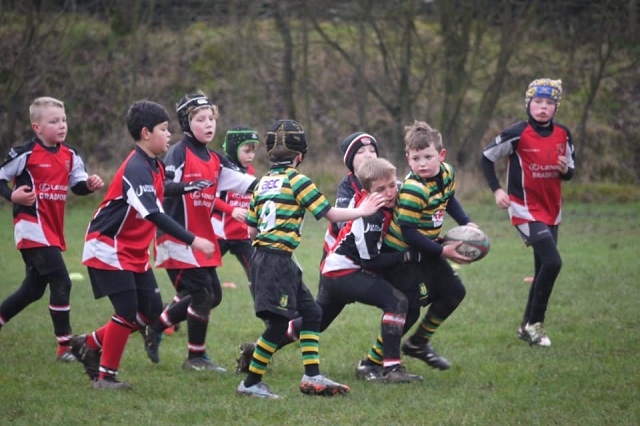 Marked improvements in the second game from Littleborough's Under 9s saw the youngsters put on a good show against Yorkshire heavyweights Old Brodleians.

The Green team started slowly in the first half of the first game, with too many mistakes leading to frequent loss of possession. Some of the more influential players did not see enough of the ball at this point to have an effect on the game.

At the end of the first half, excellent tackling and pressure from Jack Ashworth and Aden Kolbuck led to a try to take the score to 3-1 to the visitors at the first interval.

Littleborough Under 9s made consecutive tackles which pushed the team back to their own line.

Stand in coaches Chris Kolbuck and Keir Tweddle asked the team to apply more pressure in defence, to look after the ball and run forwards strong and like magic, the young guns did this to finish the game on top.

The second game started as the first ended with great team pressure in defence.

Kolbuck junior and Ashworth again led the way with ferocious defence which resulted in the likes of Noah Phillips, Ollie Fletcher, Lewis Wales and Alfie Mcloughlin joining in effectively with some great tries.

Further scores from Harry and Lewis Bracegirdle demonstrated the home side's attacking prowess. The boys looked after the ball well and pressured the other team into mistakes.

In the other Under 9 match taking place at Rakewood, Littleborough Golds like their compatriots started quite slowly as visiting Old Brodleians scored three quick tries and if it hadn't been some good solid defence from Joshua Jenkins, Archie Ridsdale and Elliot Wells as always, it could have been more.

On the other hand, the second half was totally different with likes of Matthew Makinson bursting through the Old Brods rearguard on numerous occasions. One such occasion resulted in a great solo try and capped a great performance all round. Team mate Lewis Bracegirdle also made some good hard yards in a hardworking days play.

A second game had much the same feel as the second half of the first game with Elliot Wells having some strong carries and trucking it up into the visitors very well.

Noah Caulfield and Decon Hicks-Spencer with ball in hand looked dangerous and posed an attacking threat all game, while at the rucks Cody Bush likes to get there first and distribute the ball quickly in an attempt to get Littleborough on the front foot.

All in all they had to work hard in defence to keep a good Old Brodleians team out.

On the whole the squad is shaping up nicely in the eyes of coaches Neil Makinson and Adam Bracegirdle.