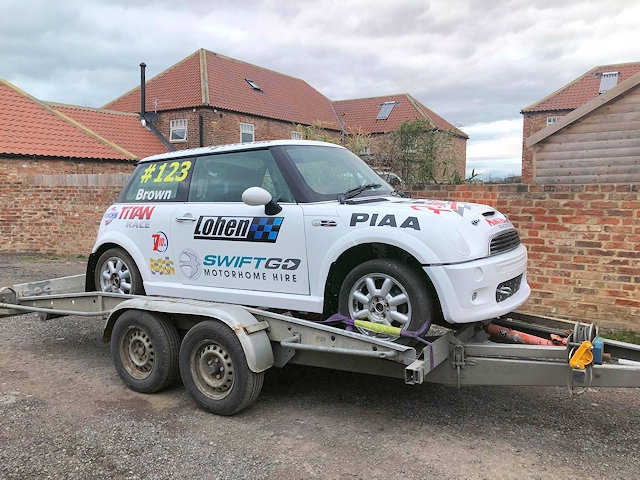 Brown's new Rallycross machine is loaded and ready for the weekend

Steve Brown will head to the Silverstone Race Circuit, the home of British motor racing, this weekend as he kick-starts his debut in the Toyo Tyres British Rallycross Championship behind the wheel of a Bellerby RX Racing Team BMW Mini on Sunday 24 March.

The Rochdale driver can usually be found behind the wheel of a Nissan Micra Kit Car, tackling stage rallies in the UK and Europe, but will make a full-time switch to rallycross for the 2019 season after sampling the circuit-based sport in 2017 and again in 2018 in the BTRDA Clubmans Championship.

Thanks to the support of Fuchs Lubricants, 710 Oils and the Bellerby RX outfit, Brown will tackle the eight-round series which begins with a packed entry at the Northamptonshire circuit.

Brown’s change of direction this season has attracted the support of Mini performance specialists Lohen and motorhome giant Swift GO who join the 31-year-old from Rochdale for his assault on the series. Brown is excited to get underway after his brief taste of the sport in the past.

“My heart still lies in rallying but when I got the chance to sample rallycross I thought, lets give it a go, I have nothing to lose” he says.

“I truly loved every second and it’s very much a different challenge as it’s not just your own driving you have to worry about its everyone else around you too. Precision becomes more important and the change from a gravel to tarmac surface half way round brings a real dynamic to the lap. It’s not as easy as it looks but I really haven’t looked forward to competing this much for a long time.”

Brown has enjoyed success at all levels of rallying in the past but remains realistic about his chances on his British Rallycross debut.

“My efforts previously were in a clubman series, and this really is top drawer stuff so I’m expecting it to be a much harder prospect. I don’t think I’ve set myself much of a goal for the first round other than to go out and enjoy it and see if we can make a final during the day. I'll have so much learn though. The car is new, the circuit is new and being a single make formula, the competition will be intense. Building the experience for round two will be important so I’ll just see how I get on.”