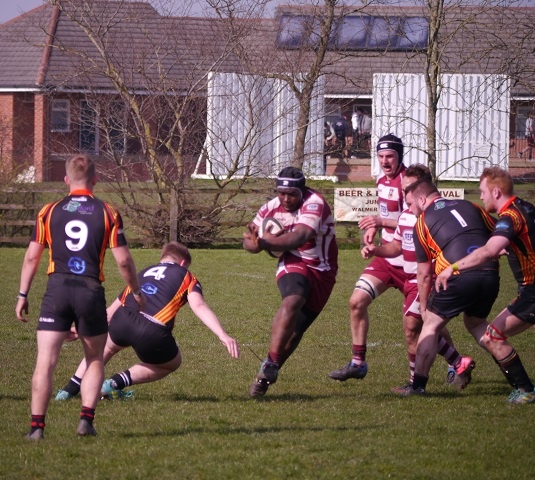 On a sunny breezy afternoon at Tarleton, a ground Rochdale's senior side had not visited before, Rochdale were missing James Duffy, Shaun Needham and Gui Sousa; Jack Green started at fly half with Harry Hayes and Rob Wadsworth on the bench.

Tarleton knocked on from the kick off and Rochdale were awarded a penalty at the scrum and made good yards down the left flank eventually winning a line out that was judged not straight and Tarleton won the scrum, trying a high box kick which was taken by Jack Green who squeezed a grubber kick through the home defence.

Tarleton gave away a penalty for offside in front of the posts and Ollie Coldman stepped up to score 0-3.

The breezy conditions caused both sides to try high kicks and the hard pitch caused some strange bounces for both full backs to deal with, Rochdale had Jimmy Flitcroft back to his best collecting two high kicks and returning them with interest to put the game back in Tarleton’s 22.

Coldman had a second chance to extend the score when Spud Green was tackled high but this time the kick drifted wide.

The home side were back on the attack using their big pack but ill-discipline caused the referee to send them back twice a further 10 metres for back chat, Rochdale used kicks to pen Tarleton back in their own 22 and the pressure was such that both Green and Travis Townsend were unlucky not to score.

Jack Green was then forced off with a hand injury and Dom Macklin took over at scrum half.

Beltus Nonleh was causing all sorts of trouble for the home defence and as he broke through 10 metres out a nice inside pass found Andrew Foster on hand to cross the line for a neat first try, the conversion was just wide.

Tarleton now began to gain some ground and from the high kick off Rochdale were defending in their own 22 for the first time, they held firm, but the referee gave two penalties in quick succession for slowing down play and on the third he yellow carded Chris Hodgkinson who had been doing some sterling work in defence.

So, with 14 men and 10 minutes to half time the pressure was on, but Rochdale held on and came back at the home side. Nonleh and Foster linking with Townsend and Serridge for a couple of excellent moves on the break.

Rochdale looked faster and more assured than their opponents and as half time approached Harry Hill won the ball in the maul and started a five pass move that saw Alex Isherwood crash over for a fine try, converted by Coldman 0-15 at half time.

The second half saw Harry Hayes and Rob Wadsworth come on and with Chris Hodgkinson restored they started to up the pressure on an increasingly ragged Tarleton defence, a good break by Blair Henry down the left wing saw the ball move inside to Foster who broke through to score his second try of the day, Coldman added the extras.

Again, the kick off from Tarleton failed to go 10 metres and Rochdale took the scrum on the centre spot, excellent work by Jonny Bradley saw the ball come to Tom Hindle, who has proved to be a real force in pack since his return from injury, the inside pass to Nonleh was a judged to be crossing and Rochdale were penalized on the Tarleton 22 metre line.

The high kicks and penalties from both sides disrupted an otherwise entertaining match, but in Flitcroft Rochdale had the perfect deterrent as he caught and returned, or ran through, his opposite numbers with ease. One of these runs led to another Rochdale scrum on the home side’s 22 and Nonleh battered through three tackles and laid off a fine pass to Jonny Mair at centre to storm over for the fourth try and the bonus points Rochdale so badly needed.

Rochdale still had some defending to do and when another high kick reached Travis Townsend in the visitors 22, he made a mark only to see his return kick not quite find touch, Tarleton made the most of this chance and Rochdale found themselves back in their own 22.

With ball in hand Rochdale were really sharp and the hard-running Ollie Coldman broke from defence to beat three men, finding Hodgkinson in support the big second row made no mistake crossing by the posts to give Coldman a good chance to convert and make it 0-34, with the last quarter to come.

The attacks kept coming with Rob Wadsworth unlucky when his charge down the right wing with a nice chip over the defence was met with a cynical block which only led to a Tarleton line out, again the high kick clearance falling to Flitcroft who ran through the tiring Tarleton defence to score a well-deserved try, Coldman converted 0-41.

The home side saved a little face by finally scoring after a knock on by Rochdale on their 22. An overlap developed, and the winger scored wide on the right the kick went wide 5-41.

Chris Hodgkinson who had had a fine game, came off with a blow to the head, so Alex Isherwood returned to the fray linking up with Macklin and Serridge in a show case passing move to score in the corner 5-46.

The Rochdale pack were now running amok, and a try in the 80th minute saw the final score 5-53.

This was one Rochdale’s best performances against a side known to be hard to beat on their own ground.

Next week in their final home game of the season Rochdale welcome league leaders Altrincham Kersal, in a game the home side would dearly love to win, 3pm at Moorgate Avenue.